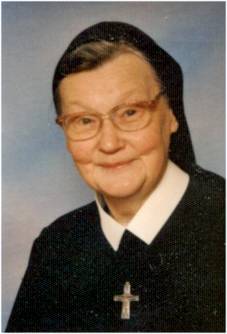 Sister Maria Alexa, Luise Kaspers, was born in Cologne as the fifth child of Alexius and Maria Magdalena Kaspers.

Her father was a businessman and she was the youngest among her siblings with whom she spent a happy childhood. After finishing primary school, Marlis, as she was called in her family, attended for two years the high school of the Sisters of Notre Dame and then St. Irmgardisschule in Köln Bayenthal. Because of the war she could only graduate in 1946. She then studied German and English at the University of Cologne. After completing her exam and her teacher training, she taught for two years at St. Ursula High School in Gelsenkirchen and in 1960, she changed to Liebfrauenschule in Cologne.

From 1991 to 2004, she lived in the community at St. Joseph High School in Rheinbach, gave private lessons and taught German to children and women from asylum seeking families as well as from German families who had returned to Germany long after the end of World War II. In many ways she helped the poor and the marginalized to settle in their new environment. In different ways she also supported the missions. For some time she looked after her infirm aunt who had accommodated her family after her parental home had been destroyed by bombs.

In 2004, Sister Maria Alexa returned to Mülhausen and in 2009, she went over to Haus Salus. As long as her physical strength allowed it, she maintained her contacts to migrant families.

On the one hand, Sister Maria Alexa was characterized by great kindness and willingness to help but, on the other hand, she was also marked by the trauma she had experienced in her childhood and in her youth by the bombing of her hometown Cologne during which her parental home and their family business were destroyed. As a twelve-year-old girl she experienced how her mother lost her life when a German military plane was shot down and she herself was only saved by the courageous intervention of her eldest sister. All her life she mourned her only brother who had gone missing during in the war.

As she was advancing in age, Sister Maria Alexa suffered from the fear of being persecuted, which occupied her thinking and acting and which made it very difficult for her to adapt to prescribed daily routines and to rules.

During the past months, her mental and physical strength was failing more and more so that un death she was finally relieved from her suffering. On the patronal feast of our Maria Regina Province, God granted her his eternal peace after a challenging life.