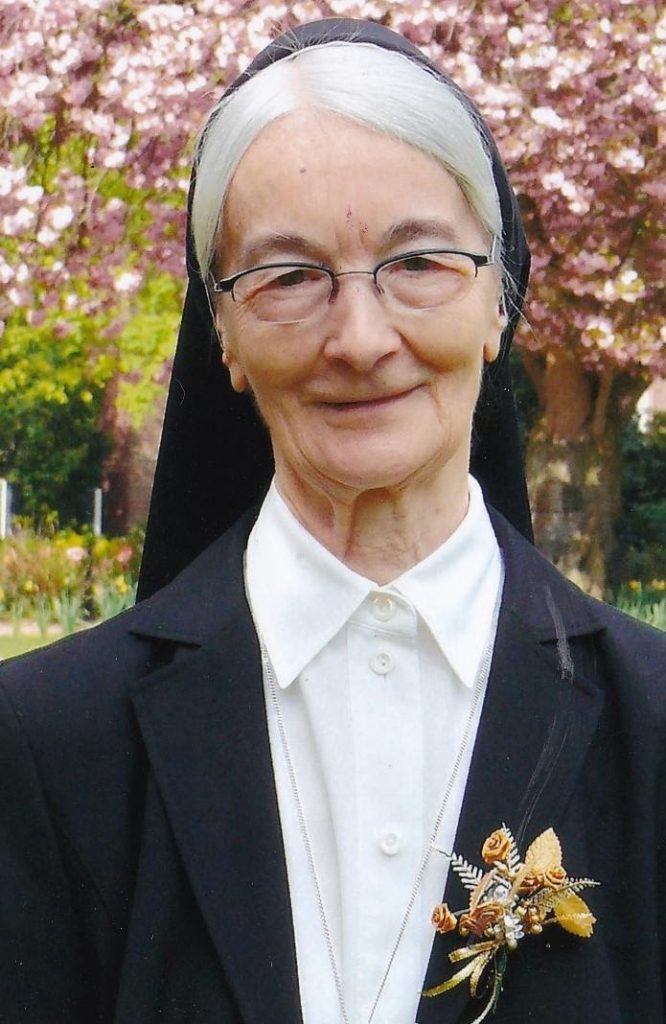 Sister Maria Richarda grew up with her three brothers in the merchant family of August and Else Gassel. In this big business household, the children learnt to assume responsibility at an early age. After completing middle school, Richarda did a school and practical training at Liebfrauenschule in Ratingen, which she completed with the Business Administration Exam.

After her profession, she attended the professional seminar for kindergarten teachers in Oedt and in the following years, she ministered as an educator in different nursery schools, children’s homes, and boarding schools, and from 1970 to 1978, she worked in all-day care at Liebfrauenschule in Mülhausen. For one year, she followed her wish to live as an adoration sister in the motherhouse in Rome. Then she studied administration and accounting.

In 1980, she took over the management of “Haus Pius XII“, the home for senior citizens in Hürtgenwald-Vossenack, and the task as sacristan. When the new, extended home for senior citizens called “Geschwister-Louis-Haus“ was opened, she resigned from the management of the house and became in charge of the cafeteria. Besides her main ministry, she was actively involved in St. Josef’s parish as a member of the parish council and the committee for liturgy, as lector and minister of the Eucharist, and as organist. Since she was friendly, ready to help, and gifted with many creative talents, she was a driving force for the implementation of many activities in the home for senior citizens, in the parish, and in the village. Everybody appreciated her because of her friendly manners.

On 11 July 2013, she received the honorary prize of County Düren for her social and church commitment by the district administrator Wolfgang Spelthahn within the frame of a festive program in the culture hall in Langerwehe.

Because of increasing health problems, she decided to move to our sisters’ retirement home in Mülhausen. The move came quickly and unexpectedly because she was diagnosed with a malignant tumor, and she was transferred from the hospital to Mülhausen as a seriously sick person. It was not possible any more for her to say goodbye to Vossenack and her beloved ministry.

In the silence of her room, she prepared her going home to God, cared for and accompanied by her co-sisters and the employees in nursing. Consciously and quietly, she gave her life back into God’s hands.