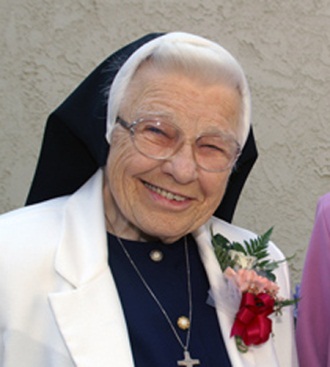 Sister Mary Donnamay Weigler was born in Cleveland, Ohio on November 24, 1928, the only child of Nicholas and Frances Bruening Weigler. When Virginia was eleven months old, her mother died unexpectedly, so she and her father moved in with his parents. Although her father eventually remarried, Sister later wrote: “It was my grandmother who raised me and had the greatest influence on me during my early years.”

As a student at St. Stephen School, Cleveland, Virginia came to know the Sisters of Notre Dame. With the encouragement of her eighth grade teacher, Sister Mary Brendon, she enrolled at Notre Dame Academy on Ansel Road as an aspirant in September 1942. Virginia always considered her years as a prep among the happiest of her life. “Since I had no brothers or sisters, I relished the constant companionship of the other girls my age which prepville provided.” Virginia entered the Sisters of Notre Dame on February 2, 1946 and pronounced her first vows two years later on August 16, 1948.

Sister Mary Donnamay was a woman of many talents. She ministered in the Church primarily as an elementary school teacher and principal; first in Ohio, then in both Northern and Southern California where she had been transferred in 1953. In addition, Sister was an accomplished organist and a valued member of the sisters’ choir.

In 1993, Sister Mary Donnamay moved to Notre Dame Center where she served as local treasurer for ten years and later as receptionist for the Learning Center Pre-School. As a participant in the Apostolate of Prayer, Sister took her personal ministry to pray for and to our deceased Sisters very seriously. Sister Antoinette Marie remarked: “I think that through her prayer Sister kept up the loving relationship she had had with the sisters she knew in life, especially her aunt, Sister Mary Stephen in Chardon.”

If you asked Sister what she enjoyed most during her years at the Center, she would have replied: “Reading and working jig-saw puzzles.” Personal subscriptions to both The Universe Bulletin and The Tidings kept her abreast of ecclesial news in both Cleveland and Southern California.

One of the highlights for Sister during this period was the chance to take part in the Congregational Pilgrimage to Germany, Holland and Rome. The opportunity to meet and travel with sisters from the different provinces emphasized once again for Sister that, although the Sisters of Notre Dame was an international congregation, the same spirit was shared by sisters throughout the world.

In 2010, Sister Mary Donnamay was hospitalized because of a fall. Although she recovered, the injury compromised her ability to walk. Sister moved to Mary Health of the Sick Convalescent Facility in Newbury Park in March 2013.