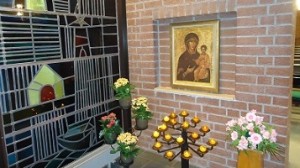 The title, “Sisters of Notre Dame of Coesfeld,” distinguishes our congregation from the many other Sisters of Notre Dame. On Süring Street in Coesfeld, Hilligonde Wolbring and Elisabeth Kühling gathered the first group of needy children whose parents were unable to care for them. As the number of children grew, St. Annatal, a large estate that was a former convent became their new home on April 2, 1850.

From Coesfeld, the sisters spread to other parts of Germany, including Mülhausen and Vechta, which later became provinces. In 1950, the centennial year of the congregation, Superior General Mother Mary Vera purchased an estate across the street from the site of war-damaged St. Annatal to serve as the provincial center of the Coesfeld province and to re-establish our congregation in Coesfeld.

A new provincial house was constructed called “Kloster Annenthal” (in remembrance of the old “St. Annatal”) where the sisters had been living since 1978.

In 2008, the Mülhausen, Coesfeld, and Vechta provinces merged to form one German province of the Sisters of Notre Dame centered in Coesfeld, the birthplace of our Congregation.

The Province celebrates August 22, the Feast of the Queenship of Mary, as its Patronal Feast.

Visit the Sisters of Notre Dame in Coesfeld, Germany
https://www.snd-europa.de/