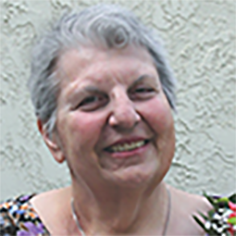 Behold the handmaid of the Lord.

Sister Mary Emilie Ann was the oldest child of Nunzio and Margaret Cristino Palladino.  Her parents had built their home on three acres in Seven Hills Village, a suburb southwest of Cleveland, so she and her two brothers grew up surrounded by open fields populated by deer, pheasants, wild turkeys and rabbits.  Her Italian heritage was, she later wrote, “as integral in our lives as breathing.”  Emilie Ann’s paternal grandmother taught her her prayers, sang folk songs to her and told folk tales, all in Italian.

Emilie Ann met the Sisters of Notre Dame as a third grader at Our Lady of Mt. Carmel School in Seven Hills.  She attended Notre Dame Academy (Cleveland), then Notre Dame College (South Euclid) for one year.  She entered the Congregation in September 1960 and was invested the following August, receiving the name Sister Mary Nunzio.  Sister later returned to her Baptismal name, becoming Sister Mary Emilie Ann.  In 1980, Sister transferred to the California province in order to be closer to her family.

Although Sister Mary Emilie Ann spent thirty years as a high school teacher in both Ohio and Southern California as well as at the Liceo Linguistico (Rome), her nearly two decades in Pastoral Ministry, principally at Our Lady of Grace Parish (Encino), were especially meaningful to her.  “As an Adult Faith Formation Minister, I am able to empower parish members to grow in living their Faith, their knowledge of their Faith and to articulate their Faith to others who come into their lives.”

As a child, Sister Mary Emilie Ann’s parents instilled in her an appreciation of fine art through visits to various museums in the Cleveland area.  She carried this interest into her adult life, becoming a talented painter whose work is displayed at Notre Dame Center.  Sister was also a published author as well as a world traveler.  Besides the Congregational Pilgrimage and a trip to the Holy Land, a five-week sojourn in India in 1993 as part of the Fulbright-Hays Seminars Abroad Program not only deepened her appreciation of the Congregation’s internationality but also allowed her to experience what Sister herself described as “so many places of the rich Indian mosaic.”

Sister Mary Emilie Ann thought of her life as “a road with many bends.”  When her health began to fail six years ago, she met each “turn” with graciousness, serenity and gratitude to her sisters, family and friends for their prayers and support.  She continued to be involved at Our Lady of Grace Parish especially by attending the Sunday Liturgy and contributing items to the weekly parish bulletin.  Sister was always willing to share her wisdom and experiences with her sisters when they faced the same prognosis.

Although Sister Mary Emilie Ann belonged to Rosa Mystica Province, she kept in close touch with the sisters with whom she had entered in Cleveland.  Following Sister’s death in the early evening of the Third Sunday of Easter, these sisters asked that a tree be planted in her honor at Notre Dame Center.  Sister Mary Emilie Ann – Sister, Educator, Artist, Companion, Friend – May she rest in peace.