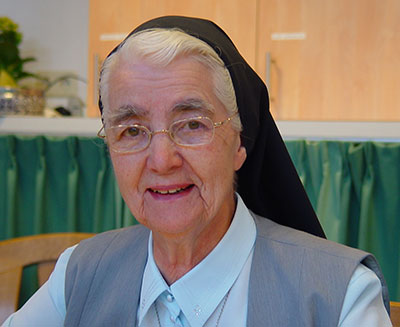 You are not death  – the Lord has called you to live with Him in His House;
you no longer need to search for Rest and Peace,
you have found that now  – cause you are safe at home.

The passing of Sister Maria Lucien does not mean death for us, but living. To die is to be sown so that there will be growth in a new and eternal life.

Sister Maria Lucien grew up in a warm and religious family. Her parents had seven children. She was the third of them. Two of her brothers died at a very young age. As a young girl, sister worked in families, she helped them out so the mothers would get a little rest.

At the age of 27 she told her parents that she, like one of her brothers, wanted to live religious life. One Brother had already started a family, another was already a priest. She wanted to join the Sisters of Notre Dame in Tegelen.

Soon after her profession she was very disappointed. She fell ill and needed to undergo lung surgery. After the surgery she needed a very long time to heal, which was very hard for her. Only after her final vows she was able to do small tasks.

For 26 years, she was in charge of different groups of children in the children’s home in Amsterdam and at the boarding school in Tegelen. She did this with all her heart. She truly loved the children with Mother Julie’s motto in her mind: “Ah qu’il est bon le bon Dieu.” How good is the good God! Her wish was to reveal this through her life.

After retiring, she still ministered in different houses in Weert, Velp, Herpen and Tegelen, where she gave her best for the community, always being very precise and meticulous.

In the early morning of the 11th of May the Lord called her home so she can live safely in His house.

May she now rest in peace after her long and well spent life.