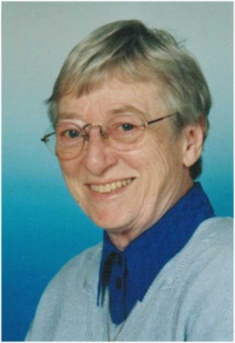 Sister Maria Armandis was born in Mulhouse (France). With her two younger siblings she grew up in her parental home and experienced the invasion of the German Wehrmacht in June 1940, the occupation of Alsace-Lorraine, the annexation of this region by the German Reich, as well as the consequences connected with this event. Against the backdrop of those incidents, it is understandable that Sr. M. Armandis’ joining a German congregation was very painful especially for her father.

After her studies and a number of years of teaching in France, she entered our congregation, which she had come to know in the Studentinnenburse in Münster in 1963.

During her novitiate, she taught French and music at our Liebfrauenschule in Büren. In the beginning, she also taught physical education, biology and geography. In the fall of this year, she could have celebrated her 50th anniversary in Büren.

Besides her teaching ministry, she had been the only music teacher for many years, conducted the school choir and orchestra and organized many musical events and celebrations. On top of that, she was in charge of the annual school exchanges with the cities of Cholet and Charenton and she remained engaged in this task even after her retirement. Her colleagues who became involved during later years were very grateful to her, especially because of her knowledge of the language and of the places.

Especially after her retirement in 1997, Sr. M. Armandis committed herself to a lot of voluntary ministries, e.g. she played the organ in the parish church in Büren as well as in the protestant church. She loved assisting in the Catholic library, she regularly visited the sick, and for several years she ministered in the hospice. She tutored many young people who were learning the French language.

Because of her failing physical strength, she had to give up her many activities one after the other, which she did silently and without ever complaining.

After a lengthy stay in the hospital in Paderborn, where she was diagnosed with cancer, she was transferred to Kloster Annenthal on July 14. Fully conscious of her situation, she decided against chemotherapy and radiotherapy. During the few weeks she still had to live, she was very grateful for all the care she received in Kloster Annenthal. She was patient and undemanding and accepted the fact that she would only live for a short time.

In the morning of September 7, she returned to Him, who had “brought her into a broad place”. May she now enjoy the fullness of life and the bliss of the heavenly banquet!