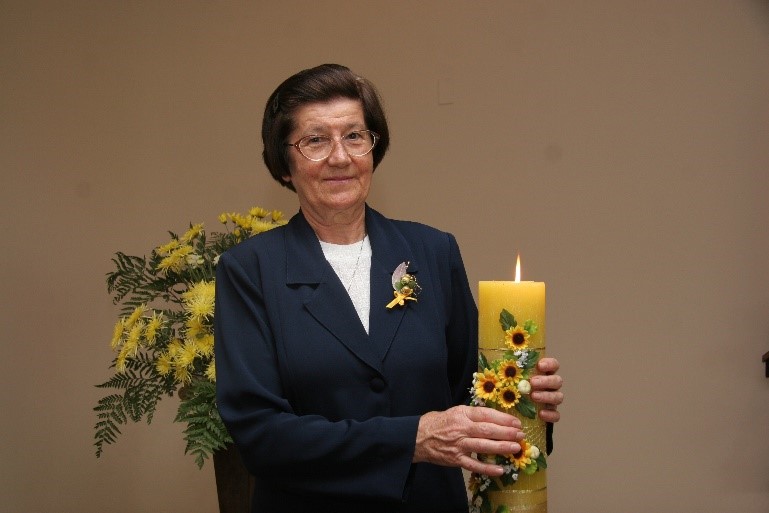 Alzenira Maria was the third of the eight children of Carlos Batistela and Francisca de Assis Prevedelo Batistela.  She grew up in a deeply Christian family, one which instilled in her a strong belief in Gospel values that lasted throughout her life.

In the story of her vocation, Sister Alzenira Maria wrote that she had wanted to be a Sister of Notre Dame since she was a child.  She would look at pictures of families whose children had become religious in the Catholic magazine Revista Rainha.  She would show the photographs to her parents and say: “I want to be a Sister, too.” This desire only became stronger as Sister grew older.  Her parents ultimately accepted her desire to become an Aspirant — the first step in her religious formation.  When Alzenira concluded her novitiate, she declared: “The longed-for day of my religious profession has arrived!”  It was February 12, 1957.  Sixty-one years later, to the exact day, Sister completed her earthly journey as a Sister of Notre Dame.

After graduating from the Curso Normal Regional Sister Alzenira Maria dedicated herself to education.  Later, she studied accounting and qualified for the position of treasurer.  Throughout her life, she committed herself totally to the province and to the Congregation as local superior, teacher and treasurer. From 1983 to 1989, she ministered as Provincial Treasurer and from 1989 to February 1996, as Provincial Superior.

It was very difficult for Sister Alzenira Maria to accept the appointment as Provincial Superior.  She wrote: “… after a long time of suffering, uncertainty, internal struggles, prayer vigils and reflection concerning my limitations … I bowed before the divine providence … and said my Yes, making myself available to serve the province with love, and through it, the Church.” The theme that permeated her writings as Provincial Superior was: “To make the good God known and loved.”

Sister Alzenira Maria was a born administrator.  She was extremely competent and possessed a broad vision.  In her ministries as an administrator and as Provincial Superior, Sister always tried to see the positive side of things and firmly believed in people’s goodwill.  She was also a woman of faith and a person who trusted in the transforming power of prayer.  She nurtured a profound devotion to Mary and had a kind, simple, and grateful heart.

At the beginning of the new millennium, the onset of Alzheimer’s began to show itself.  As a result, Sister Alzenira Maria’s vitality was severely impaired.  In 2009, she joined the Recanto Aparecida community for treatment of her condition.  Little by little Sister lost her ability to move and to communicate both of which caused her great suffering.

Sister Alzenira Maria has left us the legacy of her ability to carry out work joyously, to serve the sisters in a special way, and to be unconditionally faithful to God and to the Congregation.  May Sister intercede for us for many new and strong vocations.  May God reward her and grant her eternal life.