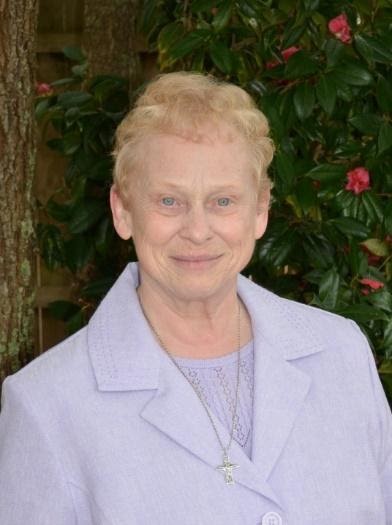 Energetic, enthusiastic, joy filled, ever smiling, Sister Darlene Mary strove to make God known and loved, especially to the many children she taught and the teachers she mentored. She aimed to lead each child to the fullness of his or her human and spiritual potential.

Born to Richard and Lucille (Maag) Siebeneck, Darlene was the second child among five girls and two boys in a close-knit, strongly Catholic family. Darlene learned from her mother the art of pie baking and taking life “one step at a time.” She attended St. Michael School in Findlay and Notre Dame Academy in Toledo. She entered the Sisters of Notre Dame in 1963 and received the name Sister Mary Rosalyn, later changed to Sister Darlene Mary.

Sister’s teaching career began in 1966 and included 23 years in kindergarten and readiness, and 13 years in grades 1 and 2. Moving to Jacksonville, Florida, in 2002, Sister served as Early Learning Director at Guardian Catholic School. Under her leadership, Guardian Catholic’s Early Learning Program has served as a model in promoting successful learning outcomes. Sister’s many local, state, and national awards attest to her commitment and effectiveness. She created high performing early learning programs in high poverty areas, carrying out the mission of social justice in the urban core. She was president of the Florida chapter of the NAEYC.

In the autumn of 2020, health needs necessitated her return to Ohio. With cancer reoccurring for the third time, Sister was told that this time it was incurable. Though she hoped and prayed that it would be otherwise, she accepted this diagnosis and knew it was time for her to leave Florida and return to Ohio. Those who knew her well knew her pain was great, but Sister Darlene Mary did not want others to be aware of it. On January 28 she was admitted to the hospital and that evening was transferred to the Hospice of Northwest Ohio.

On January 31 Sister Darlene Mary surrendered herself into the loving arms of Jesus who so loved little children. There, in his embrace, with the little ones who preceded her in death, may she rest in peace. Amen.