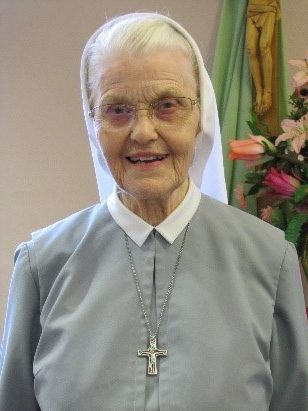 Hidden in your Heart, O Lord, are Treasures of your Love.

“Lord our God, you have been our dwelling!” These words from a hymn composed by Sister Ethel Mary and sung at her 75th jubilee exemplify her life. Sister’s ministry of prayer and music placed her in God’s dwelling. At the age of 96 God called Sister to her heavenly dwelling from her residence at Rosary Care Center in Sylvania, Ohio.

Born in Norwalk, Ohio, Ethel Rose was the eighth of twelve children of the late Aloysius and Mary (Windau) Camp. Sister attended St. Joseph School, Monroeville, Ohio, and Notre Dame Academy in Toledo as an aspirant. Ethel entered the Sisters of Notre Dame in 1943 following in the footsteps of her older sister, Sister Mary Magdaleva, who had entered the Sisters of Notre Dame five years earlier. At her investment Ethel received the name Sister Mary Lalande but later returned to her baptismal name.

After teaching elementary school children for ten years in the Catholic schools in the Toledo Diocese, she began extensive study of music education at the Gregorian Institute of America in Detroit, Michigan, Catholic University in Washington D.C., and DePaul University in Chicago, Illinois.

In 1957 she dedicated herself fulltime as music minister, choir director, and organist at several parishes as well as the SND Provincial Center in Toledo and Lial convent, Whitehouse. Many hours were also spent giving private piano and violin lessons to children and adults.

Sister’s desire for a contemplative life of prayer and service inspired her to dedicate 15 years as an Adoration Sister in the Notre Dame Motherhouse in Rome from 1974-1977 and 1993-2005. Besides her many hours of prayer in chapel, she prepared liturgical services, played the organ and contributed to the community life. Her contemplative spirit also enticed her to compose her own songs that emanated from her heart in prayer.

Sister showed loving care and concern for all the Sisters, her students, and her family through her loving smile and words of compassion. She especially enjoyed visits and outings with her priest brother, playing music to entertain others, and welcoming guests at the Motherhouse.

May she be united in the love of Mary and Jesus in melodious contemplation for all eternity.