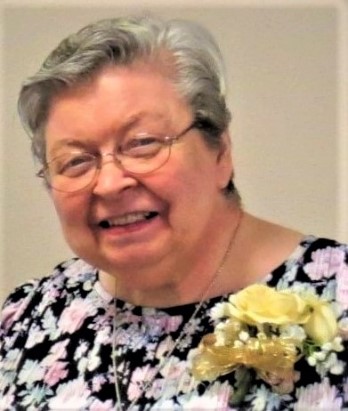 Sr. Janet Marie was born on September 19, 1940, to Clara and Vincent Hoffman in Cincinnati, Ohio. The oldest of three children, she attended St. Agnes Elementary School, Bond Hill, Ohio, and then graduated from Notre Dame Academy in 1958. Upon graduating, she obtained a job at Western Southern Life Insurance Company to help support her family after the loss of her father. After working for one year, Janet felt the call of God and entered the Sisters of Notre Dame in August 1959. She made her profession of vows on August 14, 1962.

Sister Janet Marie continued her education and received her BA from Villa Madonna College (Thomas More University) and her MA in Education from Eastern Kentucky University. Sister enjoyed teaching business and math classes for nineteen years at Notre Dame Academy. Unfortunately, in September of 1983, Sister Janet Marie suffered a brain tumor. After her recovery, sister performed a variety of duties at both St. Joseph School, Crescent Springs, Kentucky, and the provincial center.

Sister was then missioned to Holy Trinity Parish and School in Harlan, Kentucky, as a tutor and the school librarian.  On arriving, she realized, along with the other sisters there, that the entire Harlan community needed her help. The sisters’ outreach included more than appeals for funds. They also had a convent front porch pantry for distributing food, diapers, clothing, and money for medicine. They turned no one away.

In 2004, after the school in Harlan closed, Sister Janet Marie served as librarian at St. Augustine School, Augusta, Kentucky, then taught religion at Holy Trinity Child Development Center, Newport, Kentucky. In 2010 Sister Janet Marie retired to Lourdes Hall but continued to serve in the community. She enjoyed volunteering at the Park Hills Animal Shelter, where she could express her great fondness for cats.

Sister Janet Marie went home peacefully to God, on April 26, 2020.  A private prayer service was held on May 1, 2020 at the Provincial center followed by burial in the convent cemetery. A celebration of Sister Janet Marie’s life will be held for family and friends at a later date.

May the love with which Sister served her God give her eternal happiness with Him forever! May she rest in peace.