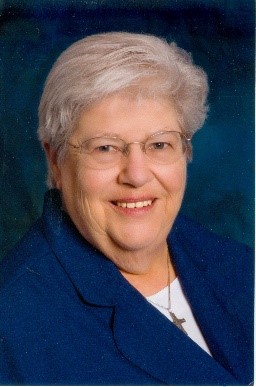 In The Netherlands during World War II, Leonarda (Leonie) was the second child born to Leonardus and Paulina (Wulterkens) Maigret. As customary, Leonie was taken to the church and baptized one day later. Though everything had to be kept dark and quiet, due to Air Raid Warnings, inside there was great rejoicing due to a new birth. In her second year of high school, her parents surprised the children with their decision to move to the United States of America. The family with three girls and two boys left Soesteberg, Utrecht to come to Toledo, Ohio under the sponsorship of the Schoen family.

Leonie began high school at Central Catholic High School in Toledo with no knowledge of English, and eventually received a diploma from Burnham High School in Sylvania. Attending Lourdes College, Sister received an associate degree in gerontology. In time she became a Certified Podiatric Assistant and worked for the same foot doctor that several of the Sisters of Notre Dame went to. It was to these sisters that Leonie spoke her question, “Do you think I could become a Sister of Notre Dame?” She joined the Sisters of Notre Dame in 1986, at age 45.

For many years Sister Leonie Marie worked with the elderly sisters in the SND infirmary as an activities coordinator and aide. She loved being with the elderly sisters; for ministering to them gave her much joy. She planned various activities and loved taking them on trips to shrines and the zoo. She was always ready to plan a party. Her hearty laugh was a joy to the sisters, as was her Dutch accent which she never lost.

In 2007 she accepted the position of coordinator of religious education at St. John Parish in North Charleston, South Carolina. Never shying away from new experiences, she also became the art teacher for the elementary children in the parish school. Perfecting her artistic talents she took pottery and watercolor classes and engaged in various hobbies.

Wherever she was, whatever she did, Sister Leonie had a hearty laugh, a knack for including others, and delight in her family and Dutch ancestry. Important to her was living each day of her religious life with generosity and love for others.

May she be filled with the joy of being in her eternal home.