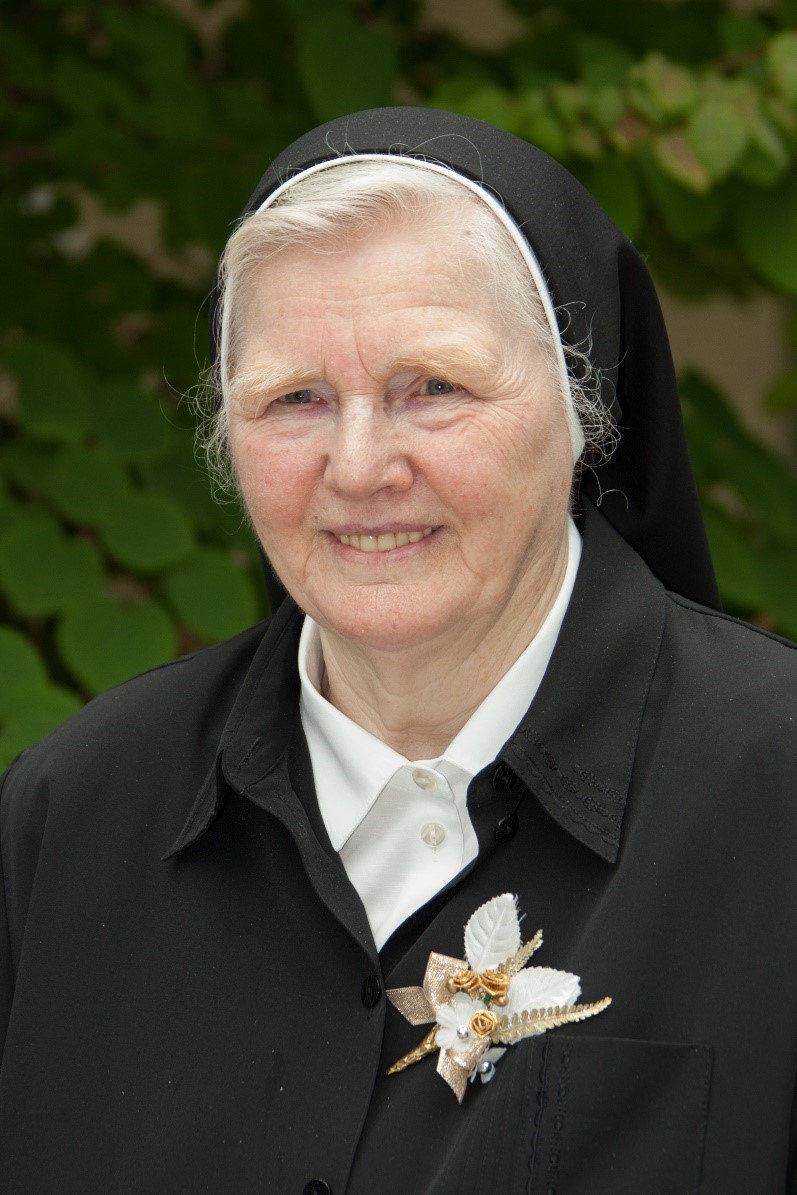 “How good is the good God!”

This saying of Mother Julie was a program for our Sister Maria Adelind.

Sister Maria Adelind and her 6 siblings grew up in a religious parental home. After completing school in 1948, Adele attended the vocational school in Vardingholt. Then Adele became an apprentice cook at Vinzenzwerk Handorf, where she got to know the Sisters of Notre Dame. There she also gained professional experiences in various fields. The then local superior, Sr. M. Medardia, wrote in her appraisal, “Adele has gained our full satisfaction in every respect. Her behaviour was impeccable, she was hard-working and ready for any work.” With this certificate Adele had good possibilities to work in other households until she asked for admission into our Congregation in 1962. At her investment, she received the religious name Sister Maria Adelind.

Her special skill in sewing our habit quickly became obvious. Thus Sister M. Adelind was entrusted with this task after her first profession in 1964; for many years she ministered in the sewing room in the Liebfrauenburg Coesfeld, in Büren, Ahlen, and Nottuln until a serious illness almost put an end to her work. In 2007, her lower leg was amputated in an operation lasting several hours. A longer stay in hospital was the result because her diabetes delayed the healing process. Sr. M. Adelind received a prosthetic leg and moved from the hospital to Kloster Annenthal, Coesfeld. In those difficult times her contacts with her nieces and nephews were a great help. In Kloster Annenthal, she had the possibility to take over small services in the sewing room.

However, in the course of time walking became more and more difficult. So she moved to the infirmary. Here she received professional care and support by our collaborators. Sister Maria Adelind was now dependent on a wheelchair. We often saw her on the way to the gallery, the “little choir room,“ as she would say, smiling. There she spent many hours in prayer, especially praying the rosary. “Praying is now my ministry,“ she would say, and “when you have time, come and take me back to my room.”

Especially her last months were marked by pain and anxiety. Personal address and being together with her co-sisters helped her to bear this anxiety or to forget it for some time. During these final days, she was not allowed to leave her room anymore because of the Covid 19-quarantine. Small attentions by our collaborators in the infirmary and in the social service gave her joyful moments. The quarantine ended for Sr. Maria Adelind on March 2nd, and only one day later in the presence of our nurses our good God called our sister home into his glory.

Sr. Maria Adelind has reached her goal after a long journey of suffering; we know that she is now safe in the hands of our good God, to whom she had dedicated her life.