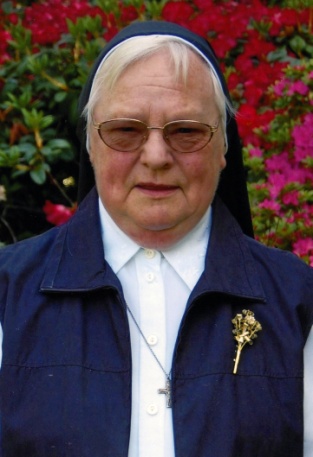 Josefa Berghus spent her childhood and youth with a brother and a sister in Emsdetten. Her father, Wilhelm Berghus, died early and so her mother, Maria Berghus, née Zuidinga, bore sole responsibility.

After completing basic primary and secondary school, Josefa worked in a factory. In her curriculum vitae she wrote, “Since my graduation from school, I have felt God’s call to follow Him in religious life”.

To gain clarity, she went on a pilgrimage to Lourdes in 1958. She then wrote, “Now, that I am sure, I am ready to say a free and joyful ‘Yes, Father’.” A few months later, she asked for admission to our congregation, and on August 15, 1959, she entered in Coesfeld.

After her first profession, Sr. M. Agathe was assigned the ministry to serve in the education of children in homes and boarding schools in different institutions of our congregation. To be well prepared for this task, she completed several kinds of training: home director, educator, and teacher of children with special needs. With a lot of dedication she gave the children what they needed.

From 1987 on, she ministered in different areas: administration, refectory, chapel… From 1994 – 2008, she ministered in Haus Meeresstern on the island of Wangerooge, taking care of the guests. That time was especially precious to her.

She loved taking care of the external areas and of the flowers in the chapel and did it with much enthusiasm. In her free time she loved designing cards, often adding a story, and then she offered them for sale. The money collected was given to our missions.

When the ministry of our sisters in Haus Meeresstern was concluded in 2008, she came to Meppen, where she served in the refectory and in the social second hand shop. In 2015, the community in Meppen was closed and Sr. M. Agathe came to Marienhain in Vechta for her retirement years. She knew Marienhain especially from the times of her formation, but she had to settle in anew, which was probably not very easy for her.

A latent diabetes and different symptoms connected with it had “accompanied“ her for many years. In April 2016, she was diagnosed with severe heart problems and she was transferred to the heart clinic in Oldenburg to receive help by surgery. With a cheerful heart, she arrived at the hospital but there were complications which could neither be relieved by medical instruments nor with medication.

On May 2, 2016, God completed her life and she went home to Him. She had lived her life in union with God and we believe that this oneness with Him has now been fulfilled so that she could joyfully say, “Yes, Father, I follow your call”.