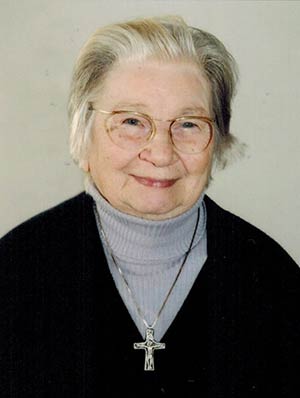 “Remain faithful until death and I will give you the crown of life” – Revelation 2:10

This Biblical verse of the Liturgy of the day of her death seems to be chosen for Sister Maria Alba. We know the fidelity of her whole life.She was faithful to God, to her call to life, faithful to her vocation as wife and mother and after that faithful to God, in Religious Life, her special dream since her youth.

Maria Erna Jacoby was born in 1923, which by coincidence was the year when our first German Sisters of Notre Dame came to Brasil.

Her parents, Jacob Strehl and Anna Catharina Eckert Strehl, emigrated from Rio Grande do Sul to Tangará, SC. Erna had six brothers and two sisters. Her sister Paulina became a Sister of Notre Dame, she received the name Sister Maria Borja, SND, and died in 2010.

Erna married Leopoldo Aluísio Jacoby who lost his life in an industrial accident. He left Erna a widow with four small children to be educated. She went on with faith and courage, taking care of the family.The two sons, Honório e Roque, are married. The two daughters –Maria and Imelda Maria – entered our Congregation: Sister M. Candida and Sr. Imelda Maria.

When the children were directed in their life, she, after a long discernment, much prayer and search of the designs of God, Erna decided to follow the dream she had had since her youth, but she was not able to accomplish: to devote herself totally to God. Thus, she received the permission from the Congregation and from the Church to enter Religious Life as a Sister of Notre Dame, receiving the name Sister Maria Alba.

After her first profession, Sister Maria Alba was transferred to Rome, and for 22 years she belonged to the international group of Sisters in the apostolate of prayer at the Motherhouse in Italy. She returned to Brasil in March 1987, to the Province Nossa Senhora Aparecida, Canoas, taking over the care of the elderly Sisters at the Recanto Aparecida. In December of the same year, she moved to the Holy Cross Province, Passo Fundo, to which her sister, Sister Maria Borja, and her two daughters belonged. Even when she was far away, she stayed connected with interest and concern. She always showed much affection to everyone, and she was a kind and happy person.

Much time of her life was dedicated to prayer, she developed a true spirit of contemplation. In her daily intentions, she had present the intentions of her family, the Congregation and the Church. Besides her dedication to Jesus in the Eucharist, she cultivated a great devotion to Mary, his mother.

Sister Maria Alba worked in several communities, being much dedicated, an artist in cooking and very devoted to the elderly and sick Sisters. In 2007, when she moved to Casa Betânia in Não-Me-Toque, at the beginning she helped with some services, but later, she herself  needed special care because her health was declining. Although she was suffering, her last remembrance was a very nice smile. She was a kind and happy person. Now, in eternity, our dear Sister Maria Alba will be contemplating the face of our Good God and look for all those who were dear to her. She will be a great intercessor, especially for more vocations to religious life and the priesthood.