“God is love, therefore we are safe”. Margarete Rode 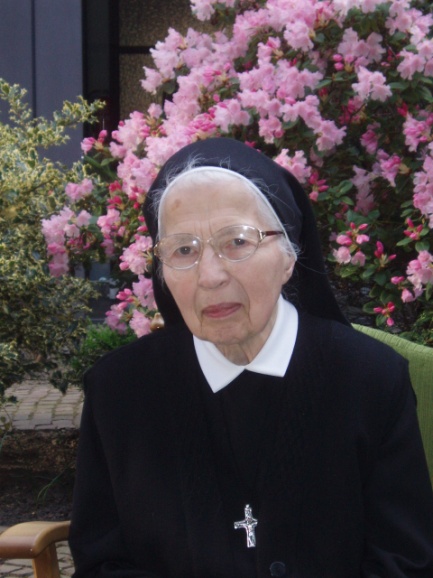 Sister Maria Aldegonde, Anna Honsel, grew up as the third of nine children on their parental farm. Her brother Gerhard was killed in Russia in 1943 at the age of nineteen; four other siblings died since then. Sister had close contacts with her two remaining brothers and with her sister. They visited her regularly until some days before she died.

After completing the basic primary and secondary school, Anna attended sewing and cooking courses to improve her skills in these areas. She also attended the farming school for women in Rhede for one year. Then she spent several years at home where she learned to do “all kinds of jobs,” as she wrote in her curriculum vitae. There she also expressed that “her work was not enough to fulfill her and that she wanted to contribute to the education of our youth as a Sister of Notre Dame.” So she asked for admittance into our Congregation in May 1953, and half a year later she entered in Coesfeld.

After her religious formation, Sister Maria Aldegonde served in various communities of our Congregation, e.g., in Oldenburg, Münster, Dingden, and Berlin. She served at the reception desk, in the cafeteria, in the house, in the chapel, and for some time as local superior. For a long time, from 1974 to 1990, she lived in the community in Marl. There she worked in the house, in the church, and in the chapel.

In spite of health impairments caused by several hip surgeries, she completed all her tasks in the community with joyful dedication.

When the community in Marl was closed, Sister Maria Aldegonde came to Kloster Annenthal in 1990. There she assisted for several years in the kitchenette of the infirmary. She also loved picking up apples in the orchard.

Sister Maria Aldegonde was interested in all the events in the community. During the last years, she went to the notice boards in her wheelchair with great perseverance and persistence, or she asked her co-sisters. Even her severe hearing loss did not discourage her.

Sister Maria Aldegonde was a prayerful woman. That gave her strength in all the difficult events she experienced. It gave her the courage to say ‘Yes’ again and again on the journey of her life, which was not always easy. She was grateful for all the help and support, the care and affection which she experienced until the end.

She could serenely give her life back into God’s hands. We believe that she is now secure in God’s loving embrace.