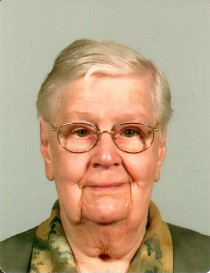 The most beautiful thing about life are the traces of love which we leave when we pass away.

Sister Maria Alidia was the oldest child born to Johanna van Wissing and Paul de Roos. She grew up with her three years younger sister in Velp where they attended the school of the Sisters of Notre Dame. During her time at school, her vocation grew and in 1940, she entered our Congregation.

One can truly say that Sister Maria Alidia was there for others. She lived and worked to make other people happy.

During her life as a religious, she mainly worked with children, first in the groups in Tegelen and later in the different nursery schools run by the Province.

In 1965, she moved to the children’s home in Herpen, where she worked with great love and joy for many years.

But that was not all.

After her retirement, she ministered in the parish in Herpen where she was a great help for the parish priest at that time.

Later, she was given the task to prepare the meals for her co-sisters and for guests. She also took a lot of car rides for them.

When the house in Herpen was closed in 2007, she came to Tegelen to enjoy her retirement.

The fact that her eyesight deteriorated was very hard for her. But by following the news on the radio and on TV, she kept herself informed about what was going on in the world.

At meals, she was an interesting interlocutor.

She had an excellent memory until the end. Whenever someone wanted to know something about certain things, she was the right person to go to.

After a fulfilled life in the service of others, she has now quietly passed away.

May she rest in peace!