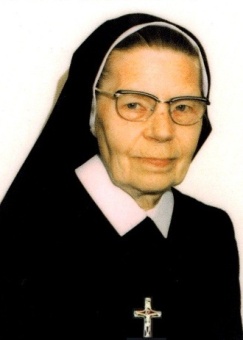 Hedwig was the third of the seven children of Heinrich Volmer and Maria Roters. She grew up on the parental farm. Her parents were devoted Catholics, and she had a care-free childhood in the midst of her siblings. She was baptized and received her first Holy Communion in St. Lamberti Church in Coesfeld. In 1934 Hedwig moved to Schöppingen, where she lived on the farm of her aunt and uncle. With a certain sense of pride she often pointed out that when living in Schöppingen, she received the sacrament of Confirmation by Cardinal von Galen. The Second World War cast a shadow over the years of her youth; her brother died in Russia in 1945. After completing the mandatory years of school she helped in the house and the fields.

In 1943 she came into contact with our sisters in the Marienstift in Gescher, where she was an apprentice learning home economics. Attracted by the atmosphere of peace and by the calmness and the Charism of the sisters, she decided to follow Christ more closely. On September 8, 1945, she entered our Congregation in Ahlen. When she was invested in Mülhausen on April 8, 1946, she received the religious name Sister Maria Amantia. After her first profession on April 8, 1948, she was sent to Bonn Venusberg as a cook – as also later to Hamborn, Oedt, Marxloh and Engers. After one year of ministry in different areas of housekeeping in Meiderich, she was transferred to Rome, where she made her perpetual profession in the generalate on February 28, 1954.

That was the beginning of her ministry in Italy, in the provincial house in Rome, in the motherhouse, in Vicarello, in Trevignano and in Milano, where she spent the longest time of her active years in Italy. There she was the soul of the house and the school. She was diligent and very responsible in her, looking at the house as her own for which she cared with all her heart and much energy. She knew everything and everyone and spoke with all, including the birds and the fish which were entrusted to her care. With the closing of the school in Milano she was sent to the then provincial house in Rome, where she was entrusted with the administration and the care of the garden – to everyone’s joy and edification. She was on her feet all day long and never retired for the night without taking a good look at the garden from each balcony and terrace to make sure all was in order. She lived and cultivated a sense of beauty and harmony in nature and loved the fish in the pond for which she was responsible. Neither did the birds in the garden lack special attention – she fed them secretly on occasion…

During the last years her task became increasingly burdensome for her, but she continued to run to and fro and took the steps up to the fourth floor on foot. It was difficult for her to put up with changes in the daily routine, and each time she stated “Indeed, there are changes!” When she was not able to go to the garden she could be found in the chapel in front of the blessed sacrament, where she prayed for the intentions of the Church and the Congregation and for all of us.

We thank the Lord for the gift He has given us in Sister Maria Amantia, for the good she has done, and for her quiet witness. Now that she is at home in the house of the father and knows what we need, we ask her to intercede for us, so that we can complete the task which our good God has entrusted to us.