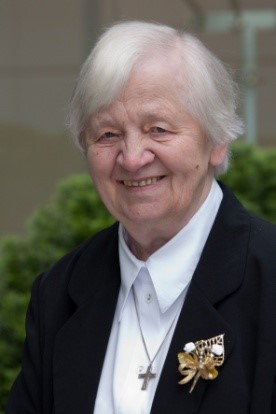 “How lovely is thy dwelling place, O Lord of hosts!
My soul longs, yes, faints for the courts of the Lord.”

This first verse from Psalm 84 shows Sister Maria Ancilla’s longing during the last weeks of her life. On Friday evening, she was allowed to follow God’s final invitation to his dwelling place.

Sister Maria Ancilla, Josefa Frerichs, was born to Josef and Josefine Frerichs on a farm in Lankum near Cloppenburg. She was the second of eight children. From 1939 on she attended the Catholic basic primary and secondary school. After the re-opening of the Liebfrauenschule in Cloppenburg, she continued school there in 1945 and passed her high school exam in 1954.

Throughout her life she had a great devotion to Mary, which had already been developed in her parental home. So after graduation, she entered our Congregation, which honors Mary as its patron saint. She had gotten to know the Sisters of Notre Dame through her aunt, Sister Maria Richaria, and as a student. On her investment, she received the name Sister Maria Ancilla, referring to the fiat of the Mother of God.

After her religious formation, she started her professional formation at the teacher training college in Vechta. Later she studied English and German at the university in Münster. In between, she spent a year in England to improve her English. At the same time, she taught German at two schools in Liverpool. In 1972, she passed her state examination. From then on, she taught at our two high schools in Ahlen and Büren.

In 1974, when she was only forty-two years old, Sister Maria Ancilla was asked to become the Provincial Superior of the Coesfeld Province. She was in office for twelve years. During her time in office, the new provincial center, Kloster Annenthal, was built. Later she was the local superior of the community in our Notre Dame School in Nottuln for fifteen years. During those times of office, Sister Maria Ancilla’s characteristics which her former principal, Sister Maria Angelina, had already described in a school report, became obvious: “Josefa has distinguished herself by her modest, reticent, and tactful behavior. Regarding her judgment, she is very just, deeply religious, honest, and down to earth.”

From 2006 to 2009, Sister Maria Ancilla was in the generalate in Rome to assist with translation. In 2009, she came to Kloster Annenthal.

Due to a bike accident, she suffered severe head injuries. Gradually, she also suffered from increasing dementia so that she became more and more dependent on assistance. Her co-sisters accompanied her lovingly in her disorientation, anxiety, and unrest.

During her last days, she repeatedly expressed her longing to go home to God. God fulfilled her wish so quickly that it was a surprise to us. He invited her to the dwelling place that he had prepared for her. May she now rest in God’s loving embrace.