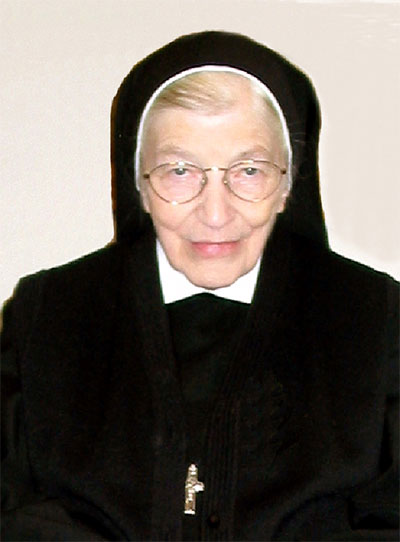 “A body hast thou prepared for me. Lo, I have come to do thy will, O God“.

On June 21, 2014, God, our Father, fulfilled Sister M. Angelis’ longing for life in abundance with Him.

Sr. M. Angelis, Paula Schröer, was the youngest of the 7 children of Heinrich und Katharina Schröer. When she was 3 years old, her father died. Her mother married again and the second father took loving care of the family. Paula enjoyed accompanying him to Münster to sell agricultural products on the market. It was a very special experience when she was allowed to sit on his lap and take the reins to lead the horses.

During the Second World War, the family of Sr. M. Angelis was struck by great suffering; in 1941 and in 1943, two of her brothers were killed and the third has been missing since 1945.

Her mother greatly encouraged Paula to develop her talents, for example her musical gifts. In order to promote her accordingly, she was sent as a boarder to the Sisters of Notre Dame in Vechta and later to Mülhausen. After graduating, she entered the Congregation in 1938 and took her first vows in Mülhausen on February 2, 1941.

From November 1941 to 1948, Sr. M. Angelis suffered from a severe lung complaint and could only temporarily do small tasks.

Then she successfully completed her teacher training formation in Vechta.

For fifteen years she taught at our primary school in Berlin. Until her old age she enjoyed telling us about that time. We could feel how wholeheartedly she loved this ministry in spite of the difficult situation of Berlin at that time.

In 1966, a new phase began in the life of Sr. M. Angelis, which challenged her readiness to assume responsibility. She was entrusted with different leadership tasks. First, she became superior in Meppen, was provincial assistant and director of temporary professed sisters in the Holy Spirit Province in Vechta. From 1973 – 1986 she was provincial superior, and then again provincial assistant until 1992. We realized that she enjoyed dedicating herself wholeheartedly to the sisters. Her long and severe illness had decisively marked her approach to life. That is why she had a special feel for the different needs of her co-sisters.

After this time filled with work, Sr. M. Angelis lived again for several years in Meppen, where she maintained good contacts with the people in her surroundings as well as with her family.

In September 2009, Sr. M. Angelis and Sr. M. Juvina were transferred from Meppen to the infirmary in Vechta, Marienhain. The two sisters shared many hours of conversation, in which they gratefully enjoyed talking about all kinds of topics. It was a great gift for Sr. M. Angelis to accompany Sr. M. Juvina during the final time of her life.

On June 21, 2014, Sr. M. Angelis‘s waiting for the coming of the Lord was fulfilled and she could say: I have come to do your will.