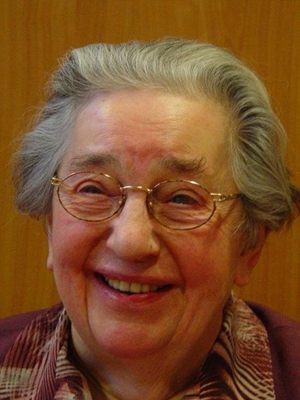 To live is to weave and to die is to give God your part.

Sister Maria Bernadet was the seventh child born to Marinus and Johanna Hendriks Vereiken in Helmond. The couple had nine children, five boys and four girls. When Francisca Catharina was seven years old, her mother died. Her elder siblings and her father took care of the family.

Francisca Catharina spent her childhood in Helmond. At the age of 22, she entered the Congregation of the Sisters of Notre Dame in Tegelen. Her elder sister had entered five years earlier.

After her profession, Sister Maria Bernadet underwent training in nursery care. During her religious life, she took care of sick children, of elderly people, and of other patients for more than 20 years.

Service and loving care were most important in her life and in her ministry. During the time of her active service, she gave many people love and happiness.

As she grew older, it was not easy for her to accept that her health deteriorated and her strength decreased. Being independent was important to Sister Maria Bernadet. Even when she depended on help, she was able to express her wishes very clearly.

In spite of her independence, she also needed some attention and a friendly word.

At the end of her life, she was able to let go and to surrender her life to her creator.

May she now rest in peace!