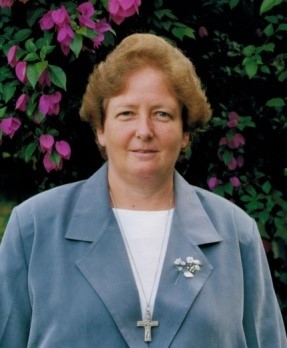 Bernardete Apolonia Fengler is the daughter of Hugo Christopher Fengler and Nathalia Maria Ewerling. Her father was a farmer, her mother a housewife; she had two brothers and two sisters.

She attended primary school in her home town and continued her studies in Passo Fundo, getting the primary teaching diploma from the ND College; she has a degree in education and specialization in pre-school, as well as in graduate school management.

She joined our Congregation as a postulant in 1971; after her formation for religious life she began her ministry as a teacher and coordinator of pre-schools. She ministered in various houses of the province as director, teacher, superior, coordinator, as well as devoting herself to catechesis.

In May, 2006, she went to the community Mai Murungu of Jécua, in the Manica region of Mozambique, where she stayed as a missionary until her death. During these years, she was local superior and responsible for the mission. In any service taken over she showed great responsibility and availability. The simplicity of Sister M. Bernardete was manifest in administration, care for people and love for the mission. Always willing to help, she had a ready smile, was joyful and had a great sense of humor.

In 2015, Sister Maria Bernardete came to Brazil to participate in the provincial chapter. After the event she went for vacation, visited her brothers, sisters, and family, and went for medical care. Yet she always expressed concern about the sisters who were alone in Jécua, one just having arrived there and others with health challenges, the end of the school term, and preparations for the new year. So she was happy to return to the mission.

On January 5, 2016, Sister Maria Bernardete and Sister Maria Imelda Hübner were taken to Porto Alegre to start on their journey. They arrived in Beira on the 6th; Sister M. Bernardete drove to Chimoio from there and spent the night. On January 7, Sister Maria Emilia Welter came to pick her up together with the driver. Already close to home, the car’s front wheel broke and caused the accident. Sister M. Emilia and Sister M. Bernardete were seriously injured and went to the Provincial Hospital in Chimoio. They were under medical care and were well cared for. Sister was anticipating to be released on January 18.

However, on the 18th she experienced a thrombophlebitis in her leg which had not been injured in the accident. With other complications, she was transferred to the intensive care unit. All efforts were made for her recovery, but her condition was serious. On January 20, at 4:00 pm, she suffered a pulmonary embolism that led to her death. Everyone was astonished and the news caused consternation both in Mozambique and in Brazil and all the Congregation. Our Superior General announced the news in a letter.

God grant her peace and reward in her in His eternal kingdom She will certainly pray for everyone. We will treasure the memory of a joyful Sister, happy in living her religious vocation.