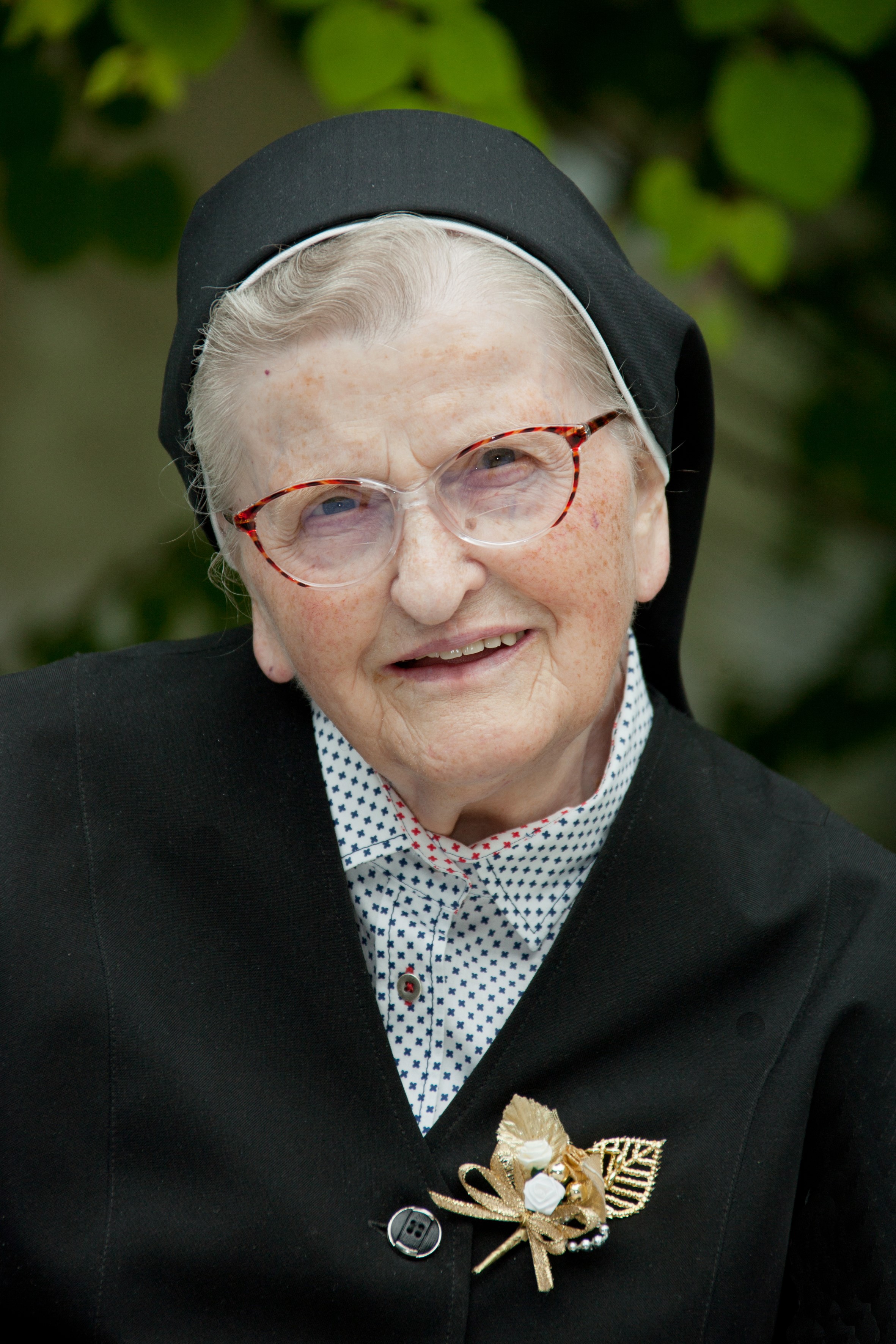 “The incredible fact that we are in God’s hand”.
– Dag Hammarskjöld

Sister Maria Bonifatia, Käthe Kolbeck, was the eldest of three children. Her parental home, where she grew up with her sister and brother, was marked by deep, down-to-earth faith. The trusting words “We are in God’s hand,” which her mother used to say in difficult times and situations, guided Käthe throughout her life. From 1934 – 1942, she attended basic primary and secondary school in Lohne and then the local commercial college for two years. After graduating successfully, she stayed at home because her mother needed her help. From 1949 – 1950, Käthe learned cooking and housekeeping at the Liebfrauenhaus in Vechta. In her certificate, several characteristics are mentioned which became also obvious in her further life, such as industriousness, a sense of responsibility, purposefulness, and cheerfulness.

On 1 May 1952, Käthe started her postulancy in our community in Ahlen/Westphalia. The investment took place at the Liebfrauenburg in Coesfeld where the center of our Westphalian province had been transferred.

After the novitiate, Sr. M. Bonifatia completed a training as kindergarten teacher and daycare provider at the college for women in Coesfeld, which was run by our Sisters. She was principal of nursery schools in different institutions and houses of our Congregation and later director of the children’s home in MünsterHandorf run by the Vinzenzwerk e.V.

Besides her many professional activities, Sr. M. Bonifatia was local superior in different communities for 28 years. That often involved challenges, especially in bigger communities with different professional ministries, which she accepted in the confidence that “we are in God’s hand”.

She treated her co-sisters and co-workers as well as the children and youth entrusted to her with loving attentiveness and straightforwardness. Following God’s will and her own conscience, she could also be assertive when she thought that it was necessary for the general well-being. She did not avoid conflicts but tried to find good solutions in dialogue.

After busy years, Sr. M. Bonifatia came to Kloster Annenthal in 1994. Supported by a co-sister, she was in charge of one refectory until 2012. She completed this ministry with loving care and benevolence. Sr. M. Bonifatia was generous. She loved making her co-sisters happy by offering them little gifts. That was especially important to her on feast days such as namedays and birthdays. She also had a big heart for the poor. Together with others, she was committed to the missions in Brazil and Africa for many years.

In 2012, the time of retirement began for Sr. Maria Bonifatia. She enjoyed using this time which was given to her for personal prayer, adoration, religious programs on TV, and visits to co-sisters. The different programs offered by the “Social Service“ were also important to her.

During the last years, Sr. M. Bonifatia’s strength diminished more and more. She realized that she needed help and support. So she decided some weeks ago to move to the infirmary. There she was still able to be with her co-sisters every day until the Lord called her on Holy Thursday to abandon herself trustingly into his hands. We believe that she has been invited to the heavenly wedding feast to celebrate Easter and her iron jubilee with the Lord.