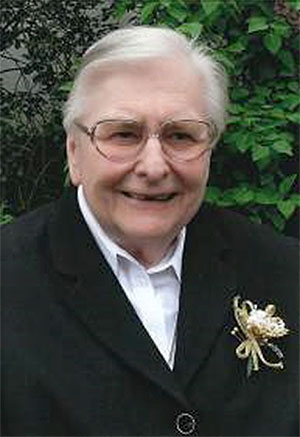 Sister Maria Bonosa, Maria Bienbeck, was the third child among the four children of Wilhelm and Elisabeth Bienbeck. She was born in Hüls near Krefeld. Deeply rooted in the Catholic atmosphere of the Rhineland, she experienced a happy and open Christian life in her family and in her parish, which became evident in her special love for children.

Basic primary and secondary school, business school, domestic science school and a school for Kindergarten teachers were the steps of her formation as a teacher in nursery schools and after-school care centers. In her home town and during her formation and internships in various institutions of the Sisters of Notre Dame, she realized her call to religious life and she started her postulancy on July 1, 1949, in Mülhausen.

During her first years in religious life, she worked in different nursery schools in the Ruhr Area and in the Rhineland. From 1959 to 1962 she was in charge of the group of business school students at Vinzenzheim in Aachen. Ready to accept new challenges, she came to Mülhausen in 1962 as the head teacher of the school of aspirants. There the first five young women from South Korea moved to the Antoniushaus with her to receive training for religious life. This task demanded from Sister Maria Bonosa a lot of empathy, pedagogical skills, patience, and commitment because the Koreans came from a completely different culture, without any knowledge of a European language, and from a Catholic environment that was marked by a Diaspora situation in the midst of an Asian, non-Christian world.

While living together with the Korean aspirants, the wish grew in her to go to East Asia as a pioneer, and from 1966 on she attended courses to prepare herself for this new mission. On July 7, 1967, she started her missionary journey to Korea together with Sr. M. Alexandra and Sr. M. Bertilde.

For health reasons, Sister Maria Bonosa had to leave Korea already in 1968. With a heavy heart, she returned to Germany. In Düsseldorf, she accepted the leadership of the child-care center in the Sacred Heart parish and received the official license to teach religion at basic primary and secondary schools. From 1972 to 2004, she taught religion at the Catholic primary school in Düsseldorf, Gerresheimer Street, and in ongoing formation for elementary school teachers. She also taught religious education to candidates for the priesthood. On the occasion of her 25th anniversary of employment, the whole school as well as representatives of the department of education in Düsseldorf and of the archdiocese of Cologne celebrated with her.

In 2004, she was transferred to the community at Liebfrauenschule in Ratingen. From there, she gave special tuition at Paul Klee School in Düsseldorf.

God had given Sister Maria Bonosa a loving and warm heart. Her joyful trust in God, her missionary zeal, and the sense of humor which is typically found in the people from the Rhineland enabled her to fill both children and adults with enthusiasm for God and to give lessons that were varied and true-to-life.

After a stroke in 2009, Sister Maria Bonosa came to Haus Salus where she kindly and gratefully accepted the help and care that helped her to bear the burden of old age and illness. She calmly lived on the rich source of her relationship with God, she maintained good contact with her family and her former colleagues, and she enjoyed the community of her co-sisters.

After a short stay at the hospital in Nettetal-Lobberich, she peacefully gave her life back into God’s hands.