“Walk on the ways of the Lord in all simplicity and sincerity”. Julie Billiart 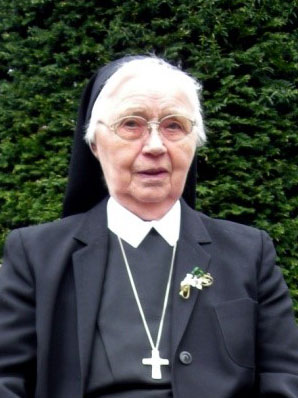 This quotation from Mother Julie expresses Sister Maria Burkarda’s basic attitude in her life and at the time of her death.

Agnes grew up in a big family in a rural area marked by Christianity. She and her sister, our Sister Maria Reinholde, were the two youngest of the 10 children in the family.

Agnes decided to become a Sister of Notre Dame and on February 01, 1949, she entered into our Congregation in Mülhausen. After her formation, she served in different areas of housework. From 1963 – 2010, she lived and worked in the Liebfrauenschule in Vechta. She made sure that the premises of our big school were always clean and tidy. For her, it was self-evident that she met all maintenance staff daily. From 1973 – 2010, she also served as sacristan. This ministry shaped her. Although she never spoke about her spiritual life, we sensed that she lived out of a deep relationship with God.

The priests who celebrated Mass with the sisters, with our school community, and with the parishioners who came on Sundays to attend the Mass for children highly respected and appreciated Sister Maria Burkharda.

She showed great interest in what went on in town, in the world, and in our school. In the morning, after Mass and breakfast, it was self-evident that she read the newspaper. She also liked going out by bike and telling us some “news“. She was especially interested in what was going on at school and was always happy when Sister Maria Hilliganda, who was principal for many years, gave a detailed report. Sister Maria Burkharda felt closely connected with the school.

She mastered the transition to her well-deserved retirement and the move to the infirmary in Marienhain with a positive attitude marked by joyful simplicity: “That’s the way it is. I am old, I don’t have to work anymore and I am well looked after. I have everything I need“. Even in the last phase of her life, when her strength was failing, she never complained but said, “I am old. I am grateful“.

When Sister Maria Henriette asked her two days before she died, “You are not doing well?!” she still answered, “I feel okay”.

We thank Sr. Maria Burkharda and God for her lived simplicity and sincerity and for her natural and open way of journeying with us. We believe that God has completed her life.