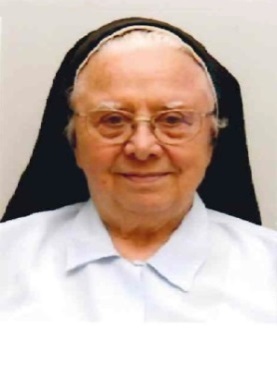 Maria was the eighth of the ten children born to Kaspar Schwalt and Maria Auer. When Maria was only three years old, her mother died of pneumonia at the age of 38. Her youngest brother was six months old then, and her eldest brother was 13. Fortunately, the grandmother on her father’s side took care of the family. For Maria, her grandmother was a shining light who taught her the most important rules in life as well as an unshakable faith which later impelled her to follow Christ in a life according to the evangelical counsels.

She got to know our sisters in Baldissero, where she learned housekeeping and cooking. In the quiet atmosphere there she heard the call of the Lord whom she followed with great firmness. On the feast of the Sacred Heart in 1948, she asked Mother Verona, the then provincial superior of the Sacred Heart Province, for the permission to enter the novitiate, which she did on December 6 of the same year.

Being a native of the Vinschgau in South Tyrol, she faithfully maintained the principles of the catholic faith and of the harmony and energy of the wonderful Tyrolean mountain world. Full of enthusiasm, she joyfully ministered in different houses in Italy: Rome, Bolzano, Baldissero and Turin. As a teacher and principle she left an indelible impression on colleagues, families and students. She had clear views and lived according to them. She knew how to explain complicated things in a simple way. Others had to respect what she said in few, clear words.

The closing of the school and the selling of the house in Turin was hard for her to deal with. On July 29, 2013, she took leave of Turin. Her strength was failing and she was suffering from Alzheimer’s. During the last phase of her illness, Sister Maria Cecilia gave us a shining example of patience, of gratitude and of total surrender to God’s will. Her co-sisters and the nurses who took care of her enjoyed her quiet smile. In the early morning of January 24, on her 85th birthday, she quietly passed away.

The words of farewell from the mass of resurrection are still ringing in our ears: “Dear Sister Maria Cecilia, now you have returned to the house of the Father where you have finally got to know your mother. Together with Mary, she has surely welcomed you tenderly! Tell them and Jesus about us, about our problems and our struggles. Pray for us and accompany us on our earthly pilgrimage. Intercede for us with the Father that we may follow your example on the right way that leads to the Father. Thank you!”