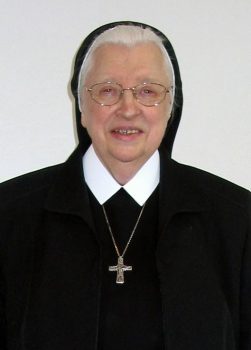 These words have accompanied Sister Maria Clemens all her life, and they have been the source of her life.

She grew up in the family of Headmaster Clemens Espelage and his wife Margareta, née Sassen. She had four brothers and was the second youngest child. Her childhood was overshadowed by the Second World War. During the Nazi time, her father “remained true to his faith and did not comply with the order of the government of the Third Reich to remove the crosses from the schools.”  This was said in the farewell speech on the occasion of his retirement. Her brother Hans lost both his legs at the age of eighteen in the war, but he managed to live and work like any healthy man.

The deeply religious attitude and the positive atmosphere in her family marked Sister Maria Clemens. All her life, she maintained close contact with her family. Since 1948, her parents and her four brothers lived in Vechta.

On October 7, 1954, Magdalena Espelage entered our Congregation in Coesfeld; at her investment, she received the name Sister Maria Clemens. In 1959, she came to Vechta, Marienhain, where she stayed until her death; during the last months, she lived at St. Hedwig-Stift, a home for senior citizens across the street from the convent.

Sister Maria Clemens learned tailoring; in 1948, she passed her journeyman’s examination and in 1962 her master’s examination. In Marienhain, she taught needlework at the school for farm women, later at the college for social pedagogy, and then for many years at the Liebfrauenschule in Vechta. On the occasion of her retirement, Sister Maria Hilliganda said, “in the name of the whole school, I thank you for your professional engagement and for the special pedagogic skills which you have shown.”

Sister Maria Clemens loved working in the sacristy. When she retired in 1995, she continued sewing, especially for the infirmary. In 2016, she came to our infirmary.

Sister Maria Clemens was a kind woman with a loving heart for others. She was sensitive towards others and held everybody in high esteem, and she had a dry sense of humor. She wanted to be good to everybody. She said, for example, that she had never been able to give somebody a bad mark at the end of the school year – “I don’t want anyone to go through life with the feeling that he failed in class.” She would work with a student for such a long time until the student could pass the exam.

Last August, she said something typical of her. In a conversation with another sister, she commented, “I am very busy today.“ “Why are you so busy?“ “I have to treat a lot of people today to make them happy.“

All her life, she loved collecting, copying, and distributing good and appealing texts, which gave joy to many people. In this way, she passed on the love she received from God in a lot of different ways. We are grateful for the love she lived, and we thank God for calling her home into his heavenly Kingdom where she can be forever with her loved ones.