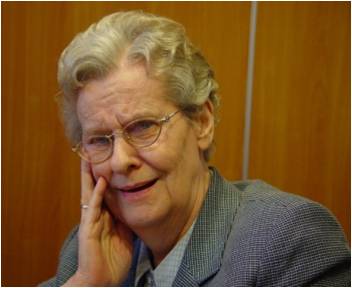 Sister Maria Clementien was born in Amsterdam and grew up in a family of 9 children with very hard working parents. She was their fifth child.

Despite the big family, her mother made time to sew and repair clothes for the orphanage in Amstelveen. After the primary school, sister obtained her diploma in lingerie and commerce. As a Young girl she worked in a bank for several years and in her free time she accompanied her mother to the orphanage to help. She loved making efforts for the children.

A few years later she joined the Sisters of Notre Dame.

After her profession, she went for higher education and was trained as a teacher.

She was a perfect teacher. She taught with heart and soul.

For a short time Sister Maria Clementien ministered in the schools in Siebengewald and Lauradorp. In 1965 she became a teacher and principal in the boarding school in Tegelen. She worked there until 1987.

After retiring from her ministry in the school she was local superior of the Provincial House for many years, until her strength was no longer sufficient.

We will remember Sister Maria Clementien as a happy, joyful religious with a sincere sense of humor. She was able to make sacrifices and was always very friendly.

Gratitude characterized her life and it was the most obvious when she was sick: the words ”Thank you very much” were always on her lips.

Sister also had a great devotion for our spiritual foundress, Julie Billiart. Her “Ah! qu’il est bon le bon Dieu” which expressed the goodness of God, was passed on to others by Sister Clementien.

The last years of her life were difficult. The Lord gave her a heavy cross to bear. She who had always been so active, became totally dependent on others. However, she remained grateful and content.

Her great dedication in educating the youth and her commitment to others throughout her life make our trust in God stronger that He has already welcomed her in his Kingdom of joy and peace.