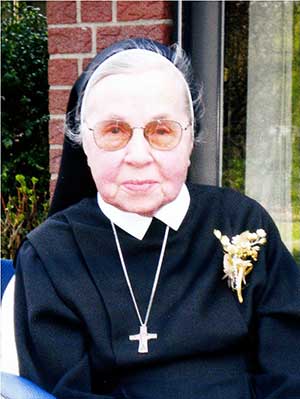 Sister M. Clotilde, Maria Albers, was born on July 12, 1918 as the eldest of the nine children of the farmer Theodor Albers and his wife Rosalie, born Höveler, in Voltlage, County Bersenbrück. She was baptized in St. Katharina Church. There she also received her first communion and the sacrament of confirmation. During the war, the family lost two sons in Russia. Two more brothers and a sister, Sr. M. Erlinda, also a sister of Notre Dame, died between 1992 and 2000.

After completing primary and secondary school in Voltlage in 1932, Maria worked on her parental farm until 1934. Since “agricultural work did not appeal to her” as she once wrote, she became a domestic servant in a businessman’s family and was then trained as a housekeeper. In 1939, she successfully completed this apprenticeship. Until 1941, she again lived on her parents’ farm.

In 1941, Maria entered the Congregation of the Sisters of Notre Dame in Mülhausen. Later, her sisters Anna, Sister M. Erlinda, and Paula, Sister M. Ehrenfried, followed. In July 1941, the convent was dissolved and seized by the Nazi regime. At that time, Sr. M. Clotilde was studying baby care in Kempen. The exam, however, was delayed and the candidates worked as trainees in children’s homes. In August 1943, Sr. M. Clotilde finished her novitiate by making her first profession in Ahlen, where she stayed at our school which served as a reserve military hospital. In 1944, she passed her exam as a nurses aid. In 1948, Sister M. Clotilde took her final vows in the convent of Mülhausen.

In the following years, she took care of children in various homes and later of her co-sisters in the infirmary of the Liebfrauenburg in Coesfeld. After a practical training in health care in Wangerooge, she started her training in nursing at St. Josef’s hospital in Cloppenburg in 1956, which she completed very successfully in 1957. Again transferred to Wangerooge, she helped the doctor of that seaside resort, working in the out-patient department and at the hospital “Meeresstern“. A doctor’s reference from that time confirms her ministry at the laboratory, the X-ray department and in nursing, underlining her “solid knowledge as well as her excellent work” and describing her as a “born nurse” who cares for the sick with understanding, consideration, skill and attention. In 1960, she had to take a year’s break because of tuberculosis. Back in Ahlen, she took care of sick and elderly co-sisters at St. Michael’s for 17 years. In 1978, she moved to Kloster Annenthal with a group of sisters and was in charge of one section of the infirmary.

In 1995, she went into her well-earned retirement. She loved to talk about her childhood and youth with her siblings. She maintained close contact with her family and this year she celebrated the 70th jubilee of her profession with her relatives. Today Sister M. Clotilde starts her last journey, a journey for which she has prepared and on which she has accompanied many of her co-sisters. We will miss her happy, simple devotion and her favorite motto, “Our soul’s home is in the light of heaven”. Lost in thought, she sometimes repeated these words in the middle of a conversation. On September 21, she left us for her “home in the light of heaven”.