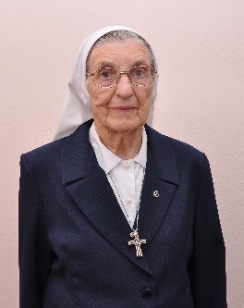 At 91 years of age, Sister Maria da Paz entered her heavenly Father’s house.  Like St. Paul she could say, “I have finished the race, I have kept the faith.”

Erena Nayr, was born on April 19, 1924 in Rio Pardo, Rio du Sul the second of twelve children born to João Egydio and Albertina Christina Klafke.  The daughter of farmers she grew up close to nature.  Inspired by her sister, Sister Maria Theonizia, who preceded her into the convent, she entered the Congregation of the Sisters of Notre Dame on January 30, 1952.  She received the religious name Sister Maria da Paz.  Just this year in January her sister, Sister Maria Theonizia preceded her in death.

From the beginning of her ministry in religious life she dedicated herself to domestic services.  Sister Maria da Paz worked in hospitals, a seminary, home for the elderly and schools.  She embraced each mission entrusted to her with great joy.  Her culinary skills not only provided good meals for others but were filled with love and care for those she served.  Her cooking in the hospital focused on healthy meals for the patients, her meals for the elderly helped them overcome the limitation of aging, meals for the seminarians helped them continue in their noble pursuits and meals for the sisters allowed them to do their mission well.

Sister Maria da Paz was an energetic person who was very dedicated to her mission.  For many years Sister was a local superior.  She gave the spiritual life priority internalizing the charism of the Congregation; a profound experience of God’s goodness and provident care and living this out in her simple lifestyle.  She promoted vocations and had a special love for the missions.  In her old age the occupied her time making crafts, clothes and other items to benefit poor children and the missions.

Like Martha in the Gospel Sister Maria da Paz was always ready to serve and to welcome.  She joyfully received the sisters and friends who visited Queen of Peace community in San Lorenzo du Sul where she lived the last ten years of her life.  Whenever possible Sister visited patients and their families bringing them comfort and a friendly word.

In 2014 sister celebrated her Diamond Jubilee—sixty years of consecrated religious life. Her family and friends were present to celebrate with her.  She had a good relationship with her family and as her health permitted she joyfully spent time with them.

On the evening of August 27, Sister Maria da Paz fell ill with severe abdominal pain.  She was taken to Holy House of Mercy in San Lorenzo, however, as her condition was grave she was transferred to Divine Providence Hospital in Porto Alegre for better care.  On the night of September 12 at 7:45 p.m., the day on which the Church celebrates the Holy Name of Mary, Sister Maria da Paz was welcomed by the good and provident God and his mother, Mary, to whom she was greatly devoted, to her heavenly reward.