“Lord, I trust in you, into your hands I commit my spirit”. 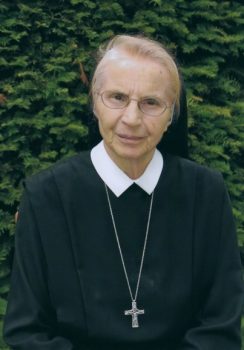 Sister Maria Dietlind’s baptismal name was Maria Engeline, but everyone just called her Maria. She grew up with 6 siblings, 2 brothers and 4 sisters, in a small village in County Cloppenburg. Her father died when Maria was10 years old. Life in her home town was marked by faith and at an early age for that time, she was permitted to silently receive her first communion in 1936.

After completing basic primary and secondary school, she worked as a nanny in a family and then on her parental farm for two years. She was an apprentice cook at Vincenzhaus in Cloppenburg, where she came to know our sisters. It seems that here she recognized her call to religious life.

On August 15, 1951, Sr. Maria Dietlind was invested in Ahlen. Her sister Josefa, Sr. Maria Bathilde, who was one year older than she, had entered our congregation three years earlier. She died in 2008, a loss that deeply affected Sr. M. Dietlind’s life. The two sisters had a trusting relationship and they spent many a vacation time together – often in Münster, where they visited their aunt, who was a Franciscan.

Sr. M. Dietlind was entrusted with different ministries in various convents of our province. After her formation as a dressmaker in Paderborn, she served at Vincenzhaus in Cloppenburg for many years. She taught the children needlework and she was also in charge of the chapel. That time was very important to her; until her death she talked about it again and again with great enthusiasm. The students were happy to learn knitting, embroidering, and sewing and they often came voluntarily in the afternoon to learn more. They readily waited in front of the classroom for some time.

At that time, she also completed a course in catechesis. At the end of the course in 1980, she was missioned by the Church to give religious instruction in her parish.

From 1988 – 2009, she served as receptionist at the Liebfrauenhaus Vechta where she was also in charge of the sewing room.

At the beginning of 2009, she moved to the infirmary in Marienhain and began her well-deserved retirement. We had the impression that some new aspects of her character became obvious during these last years: She became more balanced, laughed a lot more and shared her experiences in a humorous and original way.

When she contracted an infection at the end of last week from which she did not recover in spite of medical treatment, we knew that the end of her life was drawing near. On Thursday, May 19, 2016, God completed her life. She gave it back into the hands of our good God.