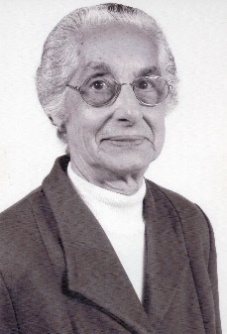 Sister Maria do Rosário, born Victoria Brandina Rosa, was called by the Lord at 87 years of age. She was born on the feast of the Transfiguration of the Lord, in August 6, 1929. Her parents Angelo Rosa and Rosa Angela Ferigolo had 10 children. Victoria was the third among five brothers and four sisters. In the Rosa family, who made their living from working with the earth, among the hills of Ivorá, were born three religious vocations: Attilio, who became a diocesan priest, Sister Maria Lydia, and Sister Maria do Rosário, both Sisters of Notre Dame. The Rosa family lived out of a deep Christian faith and generously offered three of their children to the service of God’s Kingdom.

Sister Maria do Rosário attended primary school at Menino Jesus School, in Passo Fundo. In the early years of her consecrated religious life, she devoted her strength to housekeeping. From 1957 to 1977 she worked in offices and pharmacies of hospitals and then as treasurer of schools. Despite the lack of academic formation, trusting that “The Lord is near to all who call on him, to all who call on him in truth,” she fulfilled her task in the hospital and as a treasurer with great competence and accuracy. With the beginning of the year 2000, due to her declining health, she took over less demanding tasks.

Growing plants and flowers became her hobby and she used them to decorate the house and the chapel.

Sister Maria do Rosário was silent but had a strong personality. She was demanding and accurate. Her keen critical spirit made her extremely demanding with herself and with others. At the same time, she was sociable, knew how to deal with problematic situations in her mission and also knew to play with people, when suitable.

She was zealous in living out her religious consecration. She took care of her life of prayer, and had a special devotion to Mary. As minister of the Eucharist she brought spiritual comfort and friendship to the elderly and sick people.

In October 2010 Sister M. do Rosário came to Recanto Aparecida for health care, where she stayed until the end of her life. She was happy doing small tasks, praying and serving with her presence. In the last few years a partial senility stole her memory, thus requiring special care offered by sisters, caregivers, technicians, and nurses.

During the 64 years of her religious life Sister Maria do Rosário internalized the Notre Dame charism, nourished a special appreciation for her vocation and love for the Church. Her example of faithfully living her Religious Life is a legacy that she left for us.

We are grateful to Sister Maria do Rosário for her life given to the mission of Notre Dame. May the good God reward her and welcome her into the eternal rest.