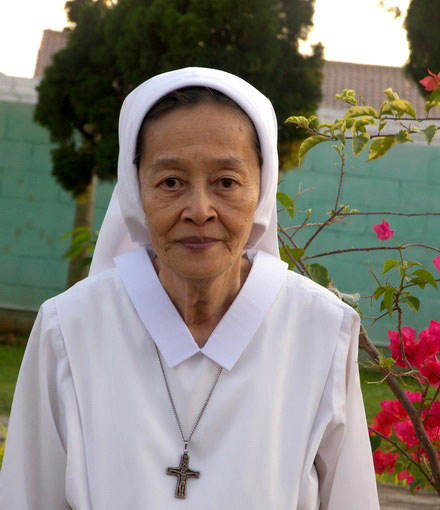 “Because when the times comes,
the Holy Spirit will teach you what you should say.” (Luke 12:12)

Kiem, as she was usually called by her family, was the second daughter of Lie, Bing Tie and Phwa, Le Nio in the family of 2 sons and 8 daughters who grew up together in Kauman, Bangil. Kiem grew up in a non-Christian family.

Since she came to know and love Christ, she felt encouraged to become a Christian, and so she was baptized on November 19, 1967, in Kebayoran Baru, Jakarta. On November 21, 1968, she received the sacrament of Confirmation in the same place.

Kiem completed her education in primary and secondary school in Surabaya. She also went for some training in special skills in Jakarta such as leadership training and psychological guidance for teenagers. She engaged in scouts activities which became her hobby.

Kiem was loved by her family. As she grew mature, she took responsibility in the care for her siblings. Likewise in her faith, she was willing to respond to Christ’s call to be a religious. This hope was fulfilled on February 16, 1976, when she entered as a postulant. Because of her late vocation and her maturity, her time of formation was shortened. On June 20, 1976 she was invested and received her religious name, Sister Maria Elis.

Her formation time confirmed her in her call to be a true SND in witnessing God’s goodness and provident care. After her profession on July 1, 1978, she worked in the provincial house. Her faithfulness in different ministries entrusted to her during her time of temporary profession truly manifested God’s presence. She professed her final vows on July 17, 1985, in Pekalongan.

Sister Elis was a person with a good sense of humor who brought much joy to the community, wherever she lived. Her love for the young generation can be seen through her ways of guidance, care, love, training, giving an example, fostering the gift which affirmed many candidates and young sisters. Her caring personality always brought wholehearted support to those who met and knew her.

Sister Elis was missioned to different ministries as local superior in Rembang, Jakarta, Ruteng, Mlati-Yogyakarta. She was well known in our Budi Rahayu Hospital, where she was in charge of different areas at different times: the kitchen and the pharmacy, administration, pastoral care and the mortuary section. She also had the chance to be a missionary in the Philippines where she did pastoral work.

Her fidelity in prayer, apostolate, and community life grounded in the mercy of God and the guidance of the Holy Spirit. Her deep love for God generated her love for the province and the Congregation.