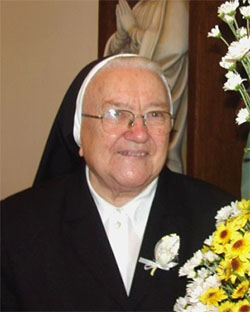 Angela Altevers was born on February 21, 1914, in Biene-Feld near Lingen in Germany. She was the fifth of eight children of Johann Bernard Altevers and Angela Maria Schulte. Two days after her birth, she already received the Sacrament of Baptism which confirmed her as a smiling child of the God she loved so much. The foundation of a courageous and strong faith was received from the family who gave three daughters to the Church and to the Congregation of the Sisters of Notre Dame: Sister Maria Elmara, Sister Maria Bernharde, already deceased, and Sister Maria Angelie who lives in the infirmary in Coesfeld.

Feeling called to consecrated religious life, Angela Altevers entered the novitiate on August 28, 1934, in Mülhausen, receiving the name Sister Maria Elmara. She professed her first vows on August 18, 1936, in the same place. On September 4, 1936, as a junior Sister, with her characteristic missionary spirit of kindness, happiness, and generosity, she left her homeland and came to Brazil as a missionary. Sister Maria Elmara was trained as a teacher and wisely applied the pedagogical principles of this formation in all the work she did as a Sister, adding the touch of Jesus’ pedagogy. She taught until 1968 and, from 1969 on, she dedicated herself to other services.

Her smile was always the authentic expression of her great kindness and her immense love for the poor. The experience of God´s goodness and provident care – the charism of a Sister of Notre Dame – poured into her life and caused her to be recognized as a kind, compassionate, and profoundly committed woman, especially to the most needy. She was a presence of solidarity with a kind and open heart and with her open hands always outstretched. In 1976, in the first years of the new mission of the Sisters of Our Lady Aparecida Province in the State of Goiás, today Tocantins, Sister Maria Elmara began a pastoral work with the people of Marianópolis. The poor from Marianópolis, where she worked for many years, immortalized her presence in the place, naming one of the schools “Sister Maria Elmara School.”

In São Lourenço do Sul, where she dedicated herself to the poor in proclaiming the Word and in social service, she was one of the founders of the Fraternal House Maria Auxiliadora. She confided to one of her collaborators that many times she could not sleep, remembering that there were people feeling cold and in need. She lived as a selfless person with few needs. She never lacked the characteristics of a heart given to others. She appreciated the presence of people and did not know complaints or ill humor. As a cheerful and happy consecrated person, she liked celebrations and dressed well to celebrate. Her keen, perceptive, and curious appearance helped her to always keep a smile on her face.

The family bonds which she always kept and nurtured strengthened her sense of belonging to the Congregation to which she belonged. She liked being a Sister of Notre Dame. Both the loss of work with the poor as well as the loss of her Religious Sister made her suffer much and caused greater damage to her health which was slowly declining. On the solemnity of the Assumption of Our Lady (celebrated on August 18 in Brazil) about 10.15 pm, and on the anniversary of her religious profession, Sister M. Elmara gave her life fully to the One whom she loved so much. Sister Maria Elmara, one of the last German missionary Sisters in Brazil, leaves us the example of a Sister who put into practice in her life the charism of God´s goodness and provident care. We believe that Mary, to whom she had a great devotion, led her to the encounter with her Beloved. May she be our intercessor with our good God.