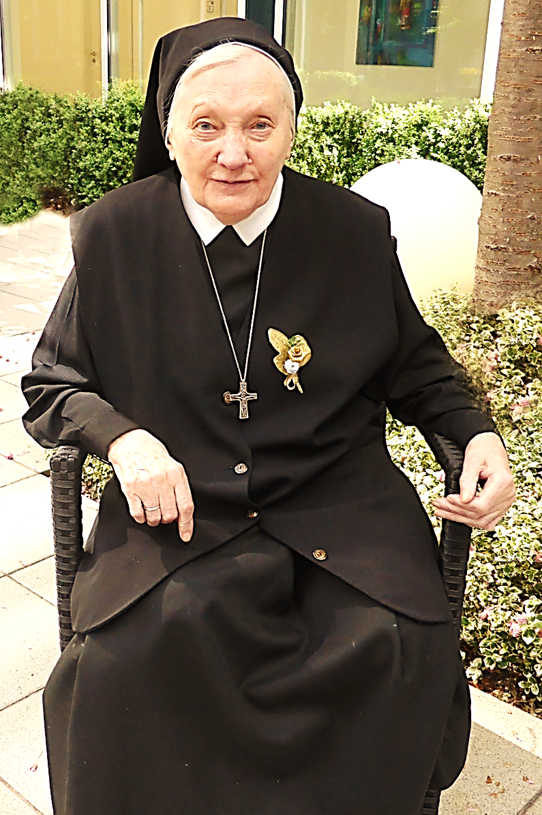 Trusting in this promise from the Gospel of the day of her death, Sister Maria Emmerenza could calmly give her life back into the hands of our heavenly Father.

Agnes Niemann was the youngest of the three daughters born to Heinrich and Maria Niemann, née Batke. In 1935, the family lost their daughter Elli. For 8 years, Agnes attended the two-grade basic elementary and secondary school in Ambergen, from which she graduated in 1937. In the Second World War, her parental home was destroyed by a bomb and by fire.

In 1948/49, Agnes spent a year in Meeresstern children’s home and hospital on the island of Wangerooge, where she learnt cooking and housekeeping and where she experienced the Sisters of Notre Dame. In 1951, she entered our congregation in Ahlen.

After her first vows in 1954, she did domestic tasks in Nottuln and Vreden. From 1956 – 1962, she managed the kitchen at the Liebfrauenhaus in Lohne, a middle school for girls, where she cooked daily for about 20 people. In 1970, after ministering in Wangerooge and Vestrup, she completed her formation as a state-certified housekeeper. In 1971/72, she took again responsibility for the kitchen in Lohne; she also took care of the elderly and sick sisters. In the grades 9 and 10, she gave classes in housekeeping. The then local superior wrote, “In the school kitchen, she created a joyful atmosphere, and the students were fully satisfied with her theoretical and practical lessons.”

In the following years in Vestrup, Sr. M. Emmerenza also gave cooking courses. From 1976 – 1986, Sr. M. Emmerenza managed the kitchen in Meppen and for the following 12 years, she took care of the refectory in Damme. In 1998, she was transferred to the Liebfrauenhaus in Vechta, where she looked after the flowers. In 2008, she started her retirement in Salus in Vechta-Marienhain, where she stayed until the closure of our infirmary in 2017. In September, she belonged to the first group of six sisters who came to Kloster Annenthal to be provided for in old age and in sickness. Sr. M. Emmerenza settled in well. She enjoyed drinking coffee with the other sisters in the cafeteria; she usually went there several times a day.

Sister went her way quietly and contentedly; she was happy when she was addressed in the dialect of her hometown. Until the end, she was astonished that all the sisters in the house knew her name. We believe confidently that she has found her way to her eternal home and taken up residence in the house of our heavenly Father.