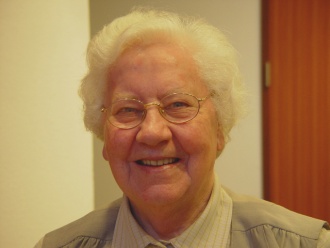 In the morning of the 28th of January, the Lord called Sister Maria Everharde to share in His eternal joy after a short period of sickness.

Sister Maria Everharde came form a warm, cosy family where everyone was welcome.

She was the fifth child of Petrus Buurman and Hendrika Kilsdonk. She had three brothers and three sisters.

Shortly after her birth, the whole family moved to Hoensbroek. Here she went to elementary school and also followed her further education. That is how she came to know the Sisters of Notre Dame.

After her training she went to Tegelen as a young girl to further improve her cooking and household skills. In 1945 she joined the Congregation.

After her profession she took a few more courses in dietetics so she could work in an institutional kitchen. For over 47 years she worked in different kitchens in the Congregation.

Sister Maria Everharde was an excellent cook and did her work always quietly and with love and dedication. She made sure that the meals for fellow sisters, children and the elderly were the highlight of the day, a time to relax and take a breath. During the meals they renewed their strength to go on with their work.

Nobody knew better that meal times were a social happening, where one’s attention went to others and the World around.

Sister Maria Everharde was also very technical. No machine broke down without her being able to get it to work again. She could often be seen in the convent corridors with a big toolbox in her hand…

When her strength became less and the work in the kitchen was too much, she moved to Wessem where she made herself available in the Parish and with activities for the missions.

In the last stage of her life in Tegelen you could see how her mind was slowly letting her down. But despite this, she was forever a joyful sister, never demanding and always thankful for every good word, deed or gesture.

We, the sisters in Tegelen are very grateful to have had this sister in our midst till the end. She was content, happy and simple. A true gem!

May the God of love, love which she radiated so clearly, now let her enter in His Kingdom.