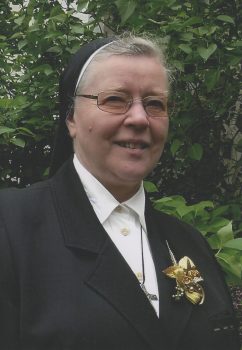 Sister Maria Fidelis was the youngest daughter born to the master locksmith Heinrich Strathewerd and his wife, Elisabeth. Despite the dangers and hardships during the Second World War and the post-war years, she spent a happy youth with her two sisters and her brother. Through her aunts Sr. M. Adelburg and Sr. M. Maxilla, she got to know the Sisters of Notre Dame at an early age.

Anneliese attended the basic primary and secondary school and the domestic science school, and then she worked in the household of her parents. At the Liebfrauenhaus in Bonn, she received further formation in housekeeping and became aware of God’s call to serve him as a Sister of Notre Dame.

She was joyful and loved to sing and make music, to dance, and to act with her relatives and friends, and she loved community. She maintained these close contacts throughout her life. Playing the accordion and the organ helped her to relax, to stand back a little from her tasks and worries, and to make others happy.

In 1959, she started her religious formation in the provincial center in Mülhausen. At her entrance into the novitiate, she received the name Sister Maria Fidelis in remembrance of her mother, who died at an early age on the feast of St. Fidelis. In 1962, she made her first profession and ministered in various affiliations in housekeeping and the supervision of apprentices and collaborators. At that time, she completed her training as a housekeeper in Geldern.

In 1972, she became local superior at the provincial center in Mülhausen. After receiving the qualification as manager of nursing homes and homes for the elderly in 1982, she became local superior and home manager in Haus Maria Einsiedeln in Bonn, where she ministered with great dedication until her death. In 1992, when a collaborator became the manager of the home, she continued working as a pastoral minister in the house for senior citizens, where she accompanied the elderly and the sick who were entrusted to her on their last journey towards a calm and peaceful death.

Her love for singing, playing, celebrating, and her accordion made each feast a special experience and helped the residents to better bear the infirmities and limitations of old age. Sr. M. Fidelis also prepared the liturgy with special attention and attracted many people.

A lot of great changes occurred in Haus Maria Einsiedeln at the time when sister ministered there:  The convent of the sisters was rebuilt into a facility for assisted living, the Josefshaus was built for the sisters, the elderly sisters who needed special care were transferred to Haus Salus in Mülhausen, and in 2006, the homes for senior citizens and for assisted living were handed over to the Cellitinnen of St. Mary from Cologne. All these events challenged Sr. M. Fidelis‘s health and meant continuous adjustments and new beginnings.

Her vitality was severely impaired by a long and serious heart disease and finally also by cancer. After surgery she did not recover, and on the Feast of St. Ignatius of Antioch, she died like God’s grain of wheat to bring fruit for eternal life.

We mourn for Sister Maria Fidelis, but we also know her longing for God and her prayer, “When shall I come and behold the face of God?” (Ps. 42: 3), which has now been fulfilled.