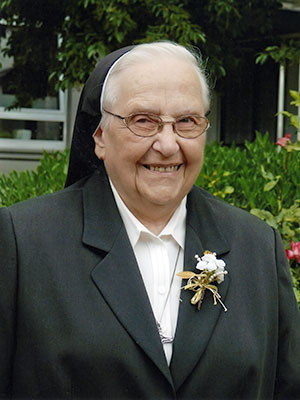 “Today you will know that the Lord will come, and he will save us,
and in the morning you will see his glory.“    Christmas liturgy

Sister Maria Friedeburg was the fifth of the six children of Otto and Elisabeth Hühmer. When she was six years old, her father, a railway official, was transferred to Breslau in Upper Silesia and the family moved there. Anneliese attended the basic primary and secondary school in Breslau. After finishing school, she realized her wish to work with children and started a formation as a children’s educator. Then she took care of children in a family in Breslau.

Together with her family and the family she worked with, she experienced the heavy bombing of Breslau and the approaching Russian front and occupation. In January 1945, Breslau was declared a fortress and the family was expelled because Upper Silesia became Polish. On their flight to the West, the family was torn apart. Anneliese was able to find her parents again in a refugee camp in Goslar, and together they moved to the Oldenburger Land, where they were also reunited with Anneliese’s siblings.

At St. Vincenzhaus in Cloppenburg, she found a job as a children’s educator. Here she came to know the Sisters of Notre Dame and felt the call to religious life, connected with her wish to serve children and young people who needed special attention because of handicaps or social needs.

On September 7, 1948, she started her religious formation in Mülhausen. After her first profession, she was in charges of groups of children in different homes and boarding schools on the Lower Rhine and in the Ruhr Area. In 1950, her elder sister Ruth, Sister M. Othilia, followed her into the congregation. Sr. Maria Othilia died in 1997. From 1962 to 1981, Sister Maria Friedeburg was in charge of the group of business school students at Vinzenzheim in Aachen. During that time, she simultaneously completed her formation as a child care worker.

Sister Maria Friedeburg was generous and open-minded and so she helped handicapped young women to find employment and to become independent. She conveyed her artistic skills, her craftsmanship and her sense of harmony and beauty to the young people entrusted to her and she helped them in every possible way.

From 1987 to 2003, she ministered at the children’s home St. Annenhof in Kempen where she was in charge of the reception desk and the sacristy. The reception desk became a place where children, employees, and guests felt understood. Sister Maria Friedeburg lovingly listened to everyone and tried to help when help was needed. She actively participated in the mission and needlework circles in the “Nativity of Mary” Parish by contributing her skills and ideas. She was so well-known in the parish and in the city that one sister later said, “Sr. M. Friedeburg, Annenhof and Kempen, that was one”!

When she moved to Haus Salus inMülhausen in 2003, she again ministered at the reception desk and on feastdays, her beautiful decorations helped to create a festive atmosphere. In spite of painful health problems, she lived for and with the community so that her sudden death in the late evening of December 20 in the hospital in Kempen touched us deeply. For her, the advent of her life is now fulfilled in her encounter with Jesus, the incarnate Son of God, whom she served all her life.