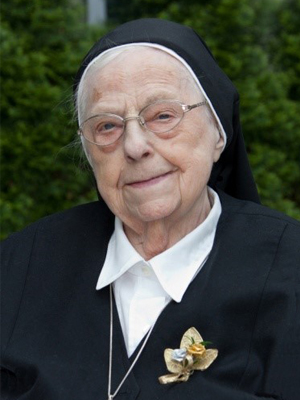 “To you is born this day in the city of David a Savior.”
– Liturgy of the day

Sister Maria Friedolinde was the eldest of four children. With her siblings (two brothers and a sister) she grew up on the parental farm.

After completing eight years at the basic elementary and secondary school in Holdorf, she assisted her parents on their farm. From 1940 to 1941, Hedwig attended the agricultural school for women in Marienhain near Vechta where she came to know the Sisters of Notre Dame.

Then she worked again on the farm of her parents. During these years, she felt the call to follow Christ as a religious sister. So she asked for admission to the Congregation of the Sisters of Notre Dame in Mülhausen on the Lower Rhine. After her religious formation, Sister Maria Friedolinde ministered mainly in the domestic area in different houses of the Congregation. In the post-war period, the communities had limited financial means and the sisters led a poor life. With commitment, hard work, and creativity, Sister Maria Friedolinde contributed to the improvement of the material situation in her community.

From 1973 to 2013, she lived and worked in Ahlen. During the first five years, she ministered in the infirmary. With great joy and love she took care of her sick co-sisters whose well-being was her primary concern. Then she became the caretaker at St. Michael’s commercial school (today a vocational college). She performed this extensive task for 16 years. Sister Maria Friedolinde was very committee d and an organizational talent with a good overview and far-sightedness. She had a friendly and warm relationship with her colleagues, the staff, and the students. She was the go-to person for all who needed her advice or some practical help. Later, the great number of visitors here in Kloster Annenthal showed how much Sister Maria Friedolinde was appreciated.

After retiring from her ministry at the school, Sister Maria Friedolinde assisted with the work in the convent. She was a good cook and she worked in the garden and in the orchard. It was a special joy for her to surprise sick neighbors with flowers from the garden.

In 2013, at the age of 92, she came to Kloster Annenthal, where she spent the last years of her life quite independently. A co-sister accompanied her lovingly.

All her life, Sister Maria Friedolinde had close contacts to her family. She was available for her relatives. This became obvious also in special situations: She lovingly accompanied her sick brother until he died in 1997, and then she took care of her sister-in-law.

At the time of her death, her nephew to whom she felt especially connected was close to her.