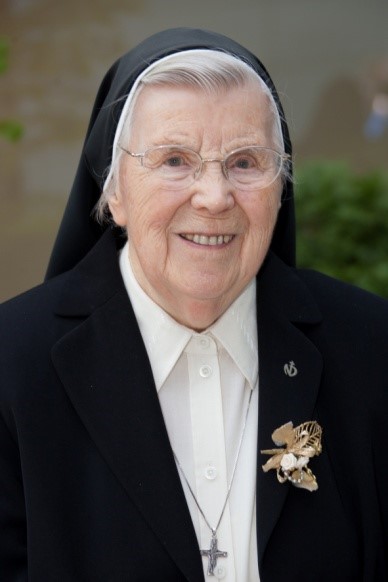 This word from the Gospel of the day of Sister Maria Geltrude’s death has been like a guide throughout her long life, she listened to God’s word and followed it.

Gertrud Garming was the first child of the couple Heinrich and Elisabeth Garming. Her father ran the cooperative in the village.

From 1937 to 1945, during the time of the Second World War, Gertrud attended the Catholic elementary school in Ottenstein. After leaving school, she assisted her mother in all domestic tasks and in taking care of her five younger siblings. In 1950, she came to the Liebfrauenhaus in Vechta, a high school with an attached boarding school, for a year to expand her housekeeping skills in the industrial kitchen. Gertrud then returned to her parents’ home for a few years. During this time, the decision matured in her to join a religious community. She followed God’s call by entering the novitiate of the Sisters of Notre Dame in Coesfeld and received the religious name Sister Maria Geltrude when she was invested in 1956. In 1960, her natural sister Maria, now Sister Maria Luzilla, followed her into the religious community.

The rich practical experience in housekeeping was a good preparation for Sr. Maria Geltrude to attend the technical school for housekeepers in Geldern, from which she graduated with quite good results. In addition, she acquired the instructor qualification before the Chamber of Crafts in Münster. Thus she was well prepared to run kitchens, teach cooking classes and train apprentices. She performed these tasks with great precision and tireless dedication in our facilities in Warstein, Vreden and Gescher. She guided her apprentices with competence, prudence and empathy. It was important to her to teach them to become responsible, independent housekeepers. At the same time, she took over the duties of the local superior in Vreden for a few years.

Sister Maria Geltrude kept in close contact with her parents, her siblings, and their families. She was very grateful for the fact that the religious community made it possible for her to care for her parents, who were dependent on help, together with her sister, in addition to managing the kitchen of the sisters’ community in Gescher.

In 1993 Sr. M. Geltrude came to the Annenthal convent; there she took over the responsibility for bread and cold cuts in the house kitchen. After two years she moved to the refectory to help with the many tasks there. As her strength diminished, she was replaced here as well in 2013. Since 2020 she belonged to the senior center. Now she had a lot of time for prayer, which she gladly used.

Sister Maria Geltrude always went her way calmly, quietly, contemplatively, listening to God’s word and at the same time also determinedly and consistently. This was also how she spent the last weeks of her life. After being diagnosed with an incurable disease, she willingly and faithfully said yes to God’s will. For us incomprehensibly fast she followed the call of God, into whose hands she gave back her life.

May she now, safe with God, live in his light.