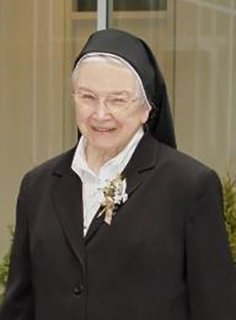 Sister Maria Gerburg – Agnes Geesink – was the second child among 11 siblings. She grew up in a family rooted in faith. This became obvious in the vocations to religious life. One brother became priest, two sisters – Sr. Maria Antonie and Sister Maria – joined our Congregation.

From 1937 to 1945, Agnes attended the catholic basic primary and secondary school in Vreden. After completing it successfully, she first assisted in her parental home and then she went for training in housekeeping with our Sisters at the Liebfrauenhaus in Cologne.

Agnes felt called to religious life. In 1950, she asked for admission into the Congregation of the Sisters of Notre Dame. After her religious formation, Sister Maria Gerburg ministered at the reception desks in the Liebfrauenhaus in Münster and at Vinzenzwerk in Münster-Handorf.

In 1958, the Lord called her to move “to a foreign country” – to Rome. There she was a blessing to all those coming to our guest house Villa Maria Regina. She tirelessly worked in the dining-room for 39 years. That was a “heyday“ in her life because she experienced first-hand the Second Vatican Council (1963-1965). She met many bishops from all over the world who were excellently looked after in Villa Maria Regina. Many groups of pilgrims as well as individual guests felt welcomed and well cared for. Sister Maria Gerburg – together with all the employees – made everyone feel at home. She took special care of the young women who came from Germany to Rome for one year to learn housekeeping. Sister Maria Gerburg was also involved in the sewing-room, she took care of the Sisters’ clothes and of the laundry.

In 1997, the Lord called her again, “Go to the land that I will show you”. He guided her to Kloster Annenthal, Coesfeld, which was to be her “home” until her death. For several years, she was a reliable, faithful, and friendly receptionist. She also took loving care of the Sisters who spent their vacation with us.

Her service at the reception desk allowed her to work for our missions. She tirelessly manufactured cards for different occasions. She also did different kinds of needlework. With her sales proceeds she supported the missionaries, especially those who worked with children.

Sister Maria Gerburg was a great help and support for her sick natural sister, Sister Maria Antonie. So the latter could often live her daily life happy and at peace.

During the last years, Sister Maria Gerburg’s strength decreased more and more, so that she depended on assistance. This was lovingly given by the employees in the infirmary, the social service, co-sisters and her family.

For Sister Maria Gerburg, for her family and for us, her co-sisters, it was a great joy that she could celebrate her iron jubilee on April 7, 2018.That was a “Grand finale” of her life in the service for God and his people.

May she now find a home in the glory of the Risen Lord!