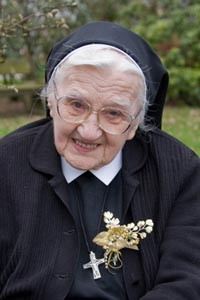 Together with 14 siblings, Anna Franzisca Clara grew up on the well-kept farm of her parents Franz Bahlmann and his wife Johanna, born Hellmann. At home and at school she was given a solid Catholic education. For Anna’s parents it was important that all their daughters received good domestic training. Three of the seven daughters of the Bahlmann family opted for religious life. Two of them became Franciscans in Olpe. Anna entered our congregation, thus following her Aunt Anna Bahlmann, Sister of Notre Dame, who died in the USA (Covington, 1936). When she started the novitiate in Mülhausen in 1938 at the age of 26, she received her aunt’s religious name “Maria Gesina”.
Being capable and experienced in the practical domestic domain, she was in charge of the kitchen and home care in different communities on the Rhine, the Lower Rhine and the Ruhr during the eight years after her first profession in 1940. From 1948 to 1951, she worked in the rest home on Wangerooge and at the receptions desk of our school in Oldenburg.

From 1951 – 1954, Sr. M. Gesina took care of the chicken run on the farm of St. Michael’s, Ahlen, before she was called to the provincial center of the then province of Coesfeld, the Liebfrauenburg in Coesfeld. Here she had to look after the provincial house and the adjacent, steadily growing vocational school.

All of us clearly remember the small figure and the serious face of Sr. M. Gesina, who always wore an apron and was always busy with a broom, a duster, etc. She was a reliable companion and co-sister, united with us in prayer and unwavering in her personal way of believing. She told us, e.g., that she had read the whole Bible three times.
Sr. M. Gesina had a special love for the missionary work in Brazil. In her commitment for this mission and thus for the poor, she felt connected with her uncle, the Franciscan Bishop Amandus Bahlmann. He lived and ministered among the poor in Brazil, founded a missionary congregation, and knew Sr. M. Gesina’s aunt, who had remained in the USA as a sister of Notre Dame until the end of her life.

During her professional ministry, Sr. M. Gesina dedicated her free time already to the missionary realm: She carefully took off stamps from the envelopes and cut them before selling them. Alone or with others she collected money for her personal project: the construction of simple, wooden houses for the inhabitants of favelas in Brazil.
More than 31 families owe their decent homes to her engagement. Together with others, she made it possible for a children’s home to be built and maintained. Needy Brazilian children wear clothes or play with things that Sr. M. Gesina had packed herself and sent to Brazil.

Only in 1999, at the age of 87, she gave up this task. Since then, she lived among us in her ascetically furnished room where she did not tolerate any flowers or other kinds of decoration, except a cross. Although she could hardly see or hear anything, she enjoyed being with the sisters she felt especially connected to. On June 26, after several days of agony, she quietly went over to her eternal home with God. We are thankful for having lived with her.