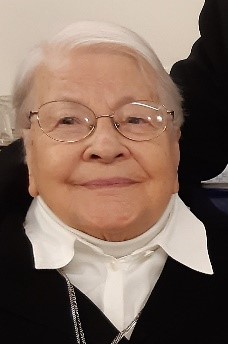 Sister Maria Giuliana was the sixth of the seven children born to Alfonso D’Uva and Vincenza Giancola D’Uva. She was born in the small village of Castelpretoso, at the foot of a majestic Marian shrine dedicated to the Sorrowful Mother. There you can still admire untouched nature. Sister’s parents were farmers who lived off the proceeds of agriculture. Later, the family moved to Carpinone, where they cultivated the soil and where Fara tended the sheep.

When she was 22 years old, the Lord found her there and she responded generously by following him in the congregation of the Sisters of Notre Dame. In 1953, she started her novitiate and received the name Sister Maria Giuliana. In 1955, she took her first vows and in 1960, she dedicated herself to the Lord by taking the perpetual vows.

During and after her religious formation she served in different areas until our superiors enabled her to continue her education so that she could work as an educator. She started her ministry in the beautiful town of Trevignano Romano, where she prepared the children for the sacraments with much devotion and where she took care of the small, historic chapel dedicated to Saint Catherine. She spent her days with the children of the municipal kindergarten. Her presentations with the little ones and her commitment in the holiday camps during the summer were well known. In the parish, Sr. Maria Giuliana was engaged in catechesis and in the preparation of the children for First Holy Communion and for confirmation. She took great pains to prepare the children of the elementary school for Sunday Mass.

In 1993, she had the great pleasure of visiting her relatives in Germany. In 1995, she participated in the pilgrimage to the roots of our congregation. In 2003, she travelled to Brazil to visit the province of Canoas; from there she travelled to Argentina to meet her relatives who had emigrated from Italy to build a better life in Argentina.

In the course of the years, the strength of the two sisters remaining in Trevignano diminished and it was necessary that they moved to Rome. Sister M. Giuliana spent her last years in great serenity, integrated into the prayer life and the daily routine of the community. She was grateful for every service, answering with a beautiful smile and a promise of prayer. After a week of serious illness, she trustingly abandoned herself into the hands of her creator.