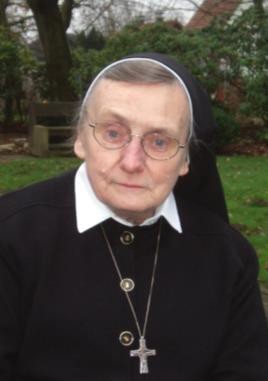 This first verse of Psalm 24 accompanied Sister Maria Henrike during her long religious life. Again and again, especially when it became “dark” around her, she prayed this verse, trusting that the Lord Himself would light her way and give her the necessary strength for the next steps.

Emilia Grote was the eldest child of the couple Bernhard and Emma Grote. Her father managed a farm. Here she grew up with her five younger siblings. From Easter 1939, Emilia attended elementary school in Beverbruch. In 1944 she transferred to the state high school in Cloppenburg, where she did not feel particularly comfortable, as her curriculum vitae shows. She was therefore happy that after the war the Liebfrauenschule was reopened, which she then continued to attend and which was more in keeping with her nature. This period was marred by the sudden death of her mother. In 1954 Emilia graduated from the Liebfrauenschule.

Soon after graduating from high school, Emilia was accepted into the novitiate of the Sisters of Notre Dame in the Liebfrauenburg in Coesfeld and was given the name Sister Maria Henrike when she began her novitiate in 1955. After her novitiate, she attended the College of Education in Vechta for three years and passed her first examination for teaching in elementary schools there in 1960. At the same time, the Bishop of Münster granted her the Missio Canonica. Thus Sister Maria Henrike was well positioned as a teacher and began her teaching career at the Liebfrauenschule in Nottuln. Here she also prepared for the second teacher’s examination, which she passed in 1963. In 1964 she moved to Berlin to the community-owned elementary school, which preceded the high school (Liebfrauengymnasium). She especially enjoyed working with the little school beginners. In addition, she had many opportunities in Berlin to participate in cultural events. Due to a serious illness, Sister Maria Henrike had to leave her beloved activity in Berlin and came to Coesfeld in 1971. After her recovery she took over some lessons in mathematics at the vocational school in Coesfeld. With her pedagogical skills, she succeeded in awakening joy in the subject of mathematics in the students, and she showed a lot of patience for students who had difficulty with the material. Her main field of ministry was administrative work related to the proince-owned schools. For a long time she had good contact with her colleagues through the processing of aid applications.

Sister Maria Henrike also maintained a lively exchange with her family. A special place in her heart was held by her aunt Rosa, about whom she spoke a great deal. After the early death of her mother, her aunt took care of the household and was there for the children, who were all still going to school. She always enjoyed attending family gatherings and sharing the joys and sorrows of her siblings and their families.

In 2008, Sister Maria Henrike moved permanently to the Senior Center in Kloster Annenthal. Now she had more time to pursue her many interests. Until the last weeks of her life, she showed a keen interest in the events of the worldwide religious community and accompanied them with her prayers. After Christmas, her strength diminished more and more. On the morning of January 19, 2023, she quietly returned to God, who was her light and salvation throughout her life. May Sister Maria Henrike now be allowed to see this light forever.