“Lord, let me trust in you anew each day”. 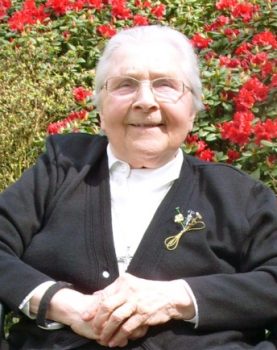 Margarete Bondu’s childhood and youth was overshadowed by a painful experience of loss. Her mother died at the age of 33, when Margarete was 7 years old. She was not able to tell us any memories or stories about that time. After a brief stay in a children’s home, she came to an aunt where she grew up with her cousins. Until her death, she maintained a close relationship with them.

On March 27, 1936, she left school in Pulheim and on September 15, 1942, she started her postulancy in Cloppenburg. On March 19, 1943, she was invested in Ahlen and received the name Sister Maria Hermella. Then she had to bear another hard loss: Her only brother was killed in Russia in 1943.

In 1945, she started her training as a nursing auxiliary in the military hospital in Ahlen where she then worked for some time. During the first years of her religious life – until 1948 – she ministered in the housekeeping domain in various houses. Then she was in charge of children’s groups in Gut Vehr, Coesfeld, Cloppenburg and also in Porta Westfalica for many years. After that she completed her training as a kindergarten teacher and educator in Recklinghausen.

From 1964 on, she mainly ministered as principal of different nursery schools. Wherever she was, she was committed and creative. In Oldenburg, for example, she founded a group for children who loved playing the flute.

At the age of 75, she ended her ministry in nursery schools, but she did not really retire yet. Bishop von Twickel, the Auxiliary Bishop responsible of the region of Vechta at that time, asked her to offer voluntary pastoral services in St. Josef parish and in the home for senior citizens in Bümmerstede. She accepted this task joyfully and with full commitment. She often told us enthusiastically about the communion services she had prepared for the elderly and that they had loved to participate because they felt so enriched no matter whether they were catholic, protestant or not belonging to any denomination. She loved singing on these occasions.

Sr. M. Hermella was in close contact with a lot of people from Oldenburg and enjoyed talking to them. She knew how to direct the attention to spiritual topics and experiences.

To maintain her strength she regularly did gymnastics with a friend once a week for many years and she went on a lot of interesting and relaxing trips. The proverbial “humor of Cologne” never left her. At that time, she was the local superior of the community in Oldenburg for three years.

In 2004, she came to Marienhain and assumed the “ministry of prayer“, which she did with the same great commitment as her previous ministries. She loved faith sharing and participated with interest.

During the last weeks her health was failing seriously and on the Feast of the Nativity of Mary God called her home. We believe that God says to her, “Have trust in me – come home and live with me in the fullness of life and joy”.