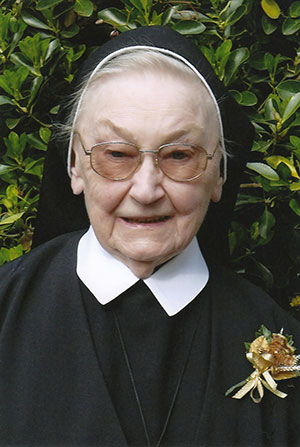 When you have done everything that has been expected of you,
when you have done much more than that –
then lay the key under the doormat and go. Do not look back. Go in peace.
Francis of Sales

Maria Klümper was the eldest of the 10 children of Ignaz und Elisabeth Klümper. All her life was marked by the great responsibility and care which she assumed as the eldest child of the large family during the difficult time of National Socialism and the Second World War.

After finishing basic elementary and secondary school, she completed her mandatory year of service in her parental household and on April 1, 1940, she started a commercial apprenticeship at a manufacturing business in Stadtlohn, at the end of which she received the certificate of completion of her apprenticeship. Courses in typewriting, stenography and textiles as well as the training as a nurse at the German Red Cross completed her education. In 1943, she was conscripted into a military based company where she assumed the administration and the organization of the purchasing department. On October 10, 1944, she was conscripted as a Red Cross nurse into the armed forces until the end of World War II.

After her father and her brothers liable for military service had returned home from the war and from captivity, her long-standing wish to enter the Congregation of the Sisters of Notre Dame was fulfilled on October 15, 1945.

After her profession, Sister Maria Hermengilde attended Notre Dame High School in Mülhausen from 1948-1951 and passed the Abitur. Her great wish to study art was not fulfilled because of her heart disease, but soon her skills in administration were discovered. Since she had the Abitur, she only needed to attend the second year at the commercial college in Ahlen.

From 1955 to 2006, Sister Maria Hermengilde assisted the provincial treasurer in the manifold tasks of the administration of the Maria-Regina-Province Mülhausen.

Her extensive knowledge, her manifold gifts regarding technical skills and craftsmanship, her great responsibility and her untiring commitment pointed the way during the time of reconstruction after the war and later, when many ministries had to be closed and prudent provisions for the future had to be made. For the younger sisters succeeding her in the ministry of administration she was a wise and patient master.

In her rare free time, she loved painting and doing creative things and she surprised her co-sisters and her family with her little works of art. She had always felt closely connected to her large family. It was a special joy for her when her youngest sister Gertrud followed her as Sr. M. Ludgerie into the Congregation of the sisters of Notre Dame in 1963.

Parting from her ministry in administration and moving to Haus Salus in 2007 was a profound and hard change but her age and her failing health made it necessary for her to accept special care.

In the evening of December 16, our good God called her, fulfilling her advent longing for his coming.