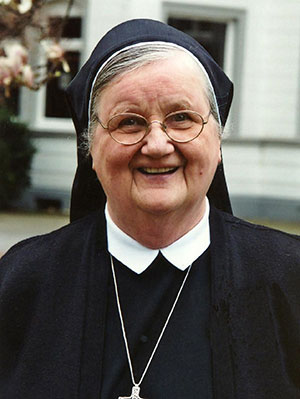 “The Lord is my shepherd, He leads me beside still waters“- Ps 23

Sister Maria Hermengildis, Margarete Schmidt, was born as the first child to Robert Schmidt and Maria, born Baldus. Together with her two younger siblings she grew up in the security of her Christian parental home, attended the basic primary and secondary school of her home town and then started a formation in housekeeping.

From 1949 to 1951, Margarete worked in Heinrich-Haus in Engers and in living with the Sisters she recognized her vocation to religious life as a Sister of Notre Dame. On May 1, 1951, Margarete entered the congregation in Mülhausen and at her investment she received the name Sister Maria Hermengildis. During the novitiate she received the qualification to be admitted to the college for nursery-school teachers in Mülhausen, which she attended after taking her first vows and where she successfully graduated in 1957.

As principal of different nursery schools in the region of Duisburg, she used all her pedagogical skills for more than 17 years in the education of the children as well as in the collaboration with the educators, parents, and committees of the parish connected with this ministry. Due to her musical talent, especially with regard to Orff’s instruments, she motivated the children to enjoy playing musical instruments on feastdays, on special celebrations and in prayer services.

From 1973 to 1975, Sister Maria Hermengildis studied social education at the technical college of higher education in Vechta and then worked again as principal in the nursery schools in Duisburg-Laar and Rath-Anhoven. From 1977 to 2004, she was also local superior, at last from 1995 on in Maria Helferin, a psychiatric clinic for children in Nettetal-Leuth.

Sister Maria Hermengildis loved her ministry, she saw it as her vocation to show the people entrusted to her God’s goodness in the wonders of nature, in the experience of community, in singing, in music, in praying and in faith sharing. The musical education, which started at nursery school, became fertile soil for children’s and youth choirs which enriched life in parishes and which gave concerts in hospitals and in old people’s homes.

Her musical education awakened many a hidden talent in the handicapped children and young people in Nettetal-Leuth and motivated them to enjoy rhythm and dance. Besides her professional task, Sister Maria Hermengildis was engaged in the parishes as a member of parish councils or of the liturgy committees.

Since 2004, she spent her twilight years in Haus Salus in Mülhausen. Since her mental and physical abilities were failing, she needed the special care of her co-sisters and of geriatric nurses. Several hospital stays could not stabilize her health and she realized that she was on her final way to God. She calmly and clearly refused any further, life prolonging measures and faithfully surrendered to God’s will.

In the evening of June 17, she gave her life back into God’s hand and is now united with Jesus Christ whom she had served in many ways and whom she had proclaimed and praised.