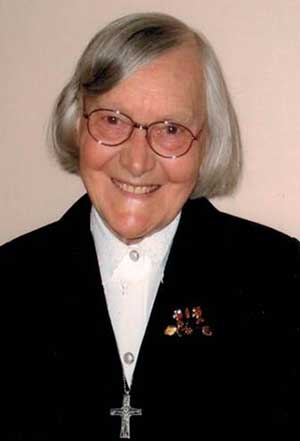 At the very end of the year 2013, also Sister Maria Hilda’s journey on earth came to its conclusion. On the feast of New Year’s Eve we celebrate with joy and gratitude the year that comes to an end and receive the New Year with hope and the wish for peace. On this feast Sister Maria Hilda was received into heaven. Her’s was almost a century of life, goodness, simplicity and service. She lived the charism and the spirituality of the Sisters of Notre Dame with depth and put them into practice.

Hilda was the daughter of Nicolau and Chatarina Seibel Maldaner. She lived in a big family with 12 children. Among them was a diocesan priest, Fr. Urbano Maldaner (deceased), and three more religious sisters in the Congregation of the Sisters of Notre Dame, Sister M. Irena, Sister M. Irma (both deceased) and Sister M. Fátima. In 2010 she celebrated her Jubilee of Grace, 70 years of faithfulness to God and to the service of the people, especially those who were suffering and those she helped into this world with her hands

She went to the São Tiago parish school in Selbach, continued her formation in Maravilha, and was trained as a nurse in the Catarina Laboré school in Curitiba. She also followed courses in health administration in São Paulo and health pastoral in Viamão.

Sister Maria Hilda sowed the seeds of God’s gooness and provident care in various locations. Among them are: Caçapava do Sul; Carazinho, Maravilha, Ibirubá, Tapera, the hospital in de Não Me Toque, Chapada, Espumoso, Selbach. In 2003, she was transferred to Casa Betânia.

For 60 years she worked in the field of health care in different areas: surgical center, medical clinic, pharmacy ad especially the maternity ward. This was the area in which she was very experienced and skillful and helped many children to be born. She was very careful and patient in her care of the newborn babies, especilly those who were born prematurely.

In the community Sister Maria Hilda was very simple and quiet, but at the same time she had a good sense of humor that made the community free. She was pleasant to live with. During times of rest and recreation we would always see her with a needle, wool or thread, and she would make clothes, knitting or crocheting for newborn babies who didn’t have any.

Her fidelity in spiritual life found its expression in her participation in the daily prayer of the community, in meditation, prayer of the rosary, which was one of her preferred devotions, spiritual reading and personal prayer. She was always willing to help and availably for any emergency or need.

The God of life let the light of His face shine upon her and reward her for her example and for all the lives she helped to be born.

As we celebrate today the Feast of the Mother of God and the World Peace Day, may Mary, Queen of Peace, give peace to the world and received Sister Maria Hilda into eternal peace and light.