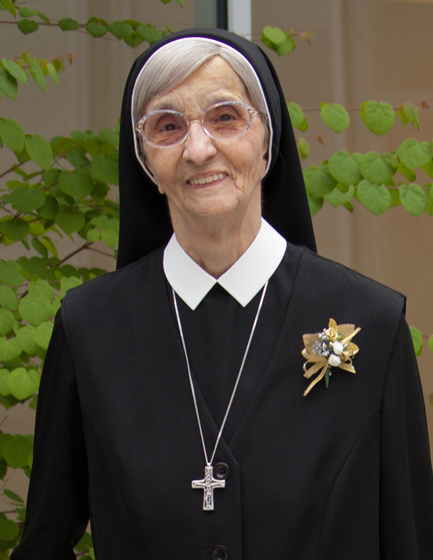 She and her many siblings grew up in their Catholic family with whom she maintained close contacts all her life. This environment led to her active involvement in the religious life of her parish and of the Catholic Young Farmers and later, it certainly also influenced her decision to enter religious life.

At the age of six, Maria started school in Tungerloh-Capellen. Because of the war, she worked in the Schültingkemper family during her last year of school. She helped with the housework and took care of the children. After completing school in 1941, Maria worked on the parental farm until June 1948.

From June 1948 to August 1949, she was with the sisters of Notre Dame at the Liebfrauenschule in Nottuln to learn to cook and how to take care of a household.

In 1949, Maria asked for admission to our congregation in Mülhausen on the Lower Rhine. After her formation for religious life in Ahlen, she ministered in different houses in the field of housekeeping.

As far as her fragile health and limited strength allowed it, she used her domestic skills in the refectory, in the infirmary, in the sowing room, at the reception desk, etc.

From 1990 to 2008 Sr. M. Hiltgund ministered at the Liebfrauenstift in Gelsenkirchen, a home for the elderly run by a charitable organization. Her friendly and open character, her personal conversations and visits contributed to a kind and benevolent atmosphere. She listened carefully and was very attentive. Therefore also her colleagues appreciated and trusted her. So she could often help to solve questions and problems.

Since she was actively involved in the parish, personal relationships were created there, too.

In 2008, Sr. M. Hiltgund was transferred to Kloster Annenthal. As far as her health allowed it, she continued to participate in community life. She was interested in everything that happened in the community.

She quietly went her way and accepted and bore her long suffering with patience. Now she can “see the goodness of the Lord in the land of the living“, as the psalmist promises.