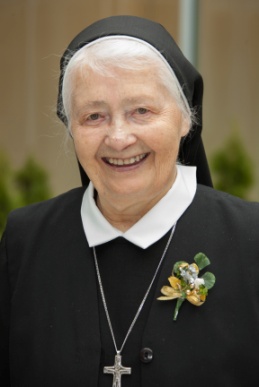 Sister Maria Hiltraude grew up with 2 sisters and 8 brothers in Kranstädt, Upper Silesia. By the expulsion at the end of World War II, she came to Minden in Westphalia. There she worked in the area of childcare and as a kindergarten assistant in a children’s home from 1945 to 1950; she also engaged in the life of the female catholic youth in her parish.

At that time, she got to know the Sisters of Notre Dame and asked for admission to our Congregation. In 1950, she began her postulancy in Ahlen. Just six years later, the then Superior General, Mother M. Vera, took her to Rome after a visit to Germany – as a “gift“, as she announced it to the local superior in the motherhouse. In 1958, Sr. M. Hiltraude made her final vows in the motherhouse.

Sister Maria Hiltraude lived in the international community at the motherhouse for 50 years. She shared in the extensive field of work in the secretariat and was appreciated as a faithful and attentive collaborator. The community could always rely on her support when there were special activities or feasts or when the sisters had personal wishes; she herself preferred staying in the background. Sister Maria Hiltraude loved laughing, she was able to wonder and to rejoice with all her heart. But that could not hide her profound seriousness and a certain nervous anxiety which might have been caused by her experiences during the war and the post-war years. She avoided talking about this.

In 2007, Sister M. Hiltraude returned to her Coesfeld province. The transition was difficult for her and increasing afflictions of old age and diseases were not easy to bear, either. She brought herself to adopt a positive view and to accept the given situation. Prayer and the connection with her co-sisters and her extended family gave her strength and filled her with gratitude. She once said, “I believe that MARY‘S FIAT was put into my cradle as an example for me to follow, because I was born on March 25, the Feast of the Annunciation of the Lord”.

Now God has pronounced his YES and graciously completed her life.